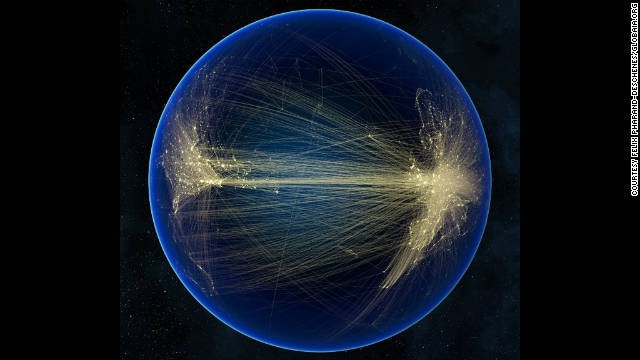 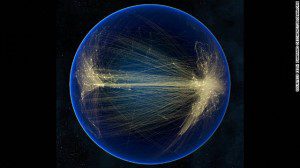 Air traffic routes are shown between North America and Europe.

Using data from a range of sources, including the National Geospatial-Intelligence Agency and the World Meteorological Organization, a series of visualizations created by Canadian anthropologist Felix Pharand depict a sprawl of air traffic routes, the underwater cables that carry the Internet, road and rail networks, pipelines, shipping lanes and electricity transmission lines.

"These images are illustrations of how far we have come at transforming our home planet," said Pharand, who is founder-director of Globaia, an environmental education organization based in Quebec. "They show a human-dominated planet where wilderness areas are shrinking and where the habitats of other species are decreasing in size.”

According to the United Nations (UN) Population Fund, it took the whole of human history until the early 19th century to reach a population of 1 billion people, and it wasn’t until 1927 that the figure doubled to 2 billion.

Now the UN calculates that the global population will reach 9 billion by 2050 and, by the end of the century, it says there could be up to 16 billion people on the planet.

"We humans have become a major force of operation on the biosphere,” said Pharand. “My goal is to foster global awareness of these issues by changing people's worldviews. The strength of these images is, I think, the fact that they are wordless and global, and their overall meaning can be grasped instantly by almost anyone without having to describe them with labels and legend."