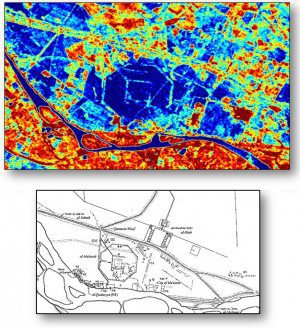 Looking down from orbit is an attractive way of monitoring historical sites in remote or politically unstable regions and often can help archaeologists make new discoveries.

The ancient city of Samarra was a powerful Islamic capital during the ninth century, located in what is today Iraq. It's the only surviving Islamic capital that retains its original plan, architecture and arts, although only about 20 percent of the site has been excavated.

In 2007, during the height of the Iraq War, it was named a UNESCO World Heritage Site in Danger because of the responsible authorities' inability to control and manage its conservation. That same year, insurgents launched a second attack on the city's mosque and damaged a clock tower. Monitoring sites like Samarra during periods of political instability is difficult and dangerous for archaeologists. Satellites, however, offer a noninvasive solution to monitor these remnants of the past and can even help to identify new areas to excavate.

The most obvious way to keep tabs on excavated sites from space is with high-resolution optical images. But new techniques reveal that satellites carrying radars can also see how underground structures influence the soil. Radar is sensitive to properties like slight differences in soil density and water content”things the human eye can't see. Changes in soil moisture and in vegetation growth can also be detected by radar. These factors are influenced by underground structures and can be used to infer historical features.

Map courtesy of A. Northedge, 2007, The Historical Topography of Samarra. Samarra studies I.