September 25, 2012
How Can Satellites “See” through Thick Smoke? 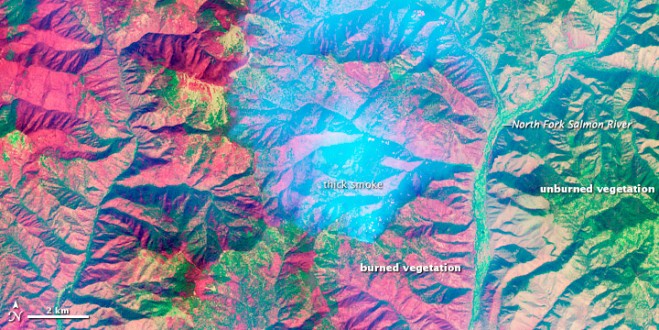 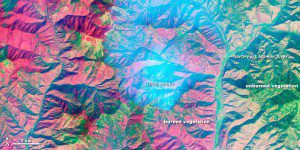 This NASA EO-1 satellite image, made from a combination of visible, near-infrared and shortwave-infrared light, provides a clear view of the burn scar.

Severe wildfires can create clouds of smoke so thick they’re hard to see through even by satellites—unless the satellites are equipped with infrared sensors.

Sparked by lightning on July 30, 2012, the Mustang Complex was just one of numerous wildfires burning through dense stands of ponderosa pine forests in central Idaho during September. At times, the smoke was so heavy that authorities were forced to close roads because of poor visibility.

These images were acquired onSept. 18, 2012, by the Advanced Land Imager (ALI) on NASA’s Earth Observing 1 (EO-1) satellite. The natural color image shows thick smoke near the fire’s flaming front that completely conceals the rugged terrain below. EO-1, however, also is equipped with an infrared sensor, through which the landscape becomes visible. 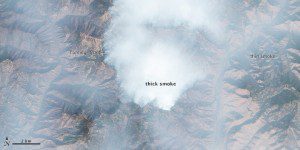 This natural-color NASA EO-1 satellite image of the Mustang Complex fire, which is based on data from the visible portion of the electromagnetic spectrum, is a good example of how thick smoke can obscure a satellite’s view of the surface.

In the infrared EO-1 image, severely burned areas appear brick red; partly burned areas are pink, and unburned areas are green. Thick smoke is light blue. While many areas have burned severely, the fire left some vegetation unscathed, particularly at the bottom of valleys and along some ridges.