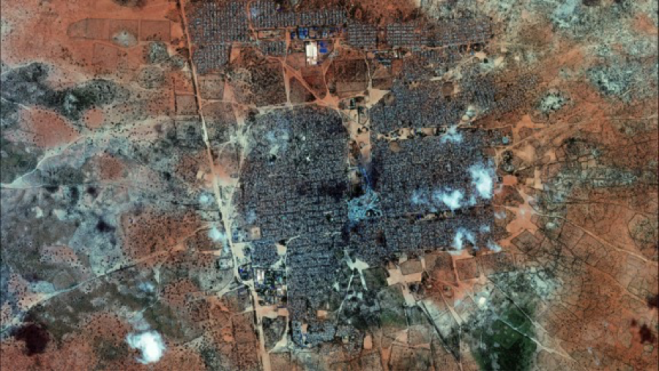 Each year, millions of people around the world are forced from their homes by natural disasters or political unrest. In a September 2017 report, the United Nations estimated that nearly 68 million people had to flee to safety in 2016, up from 64 million in the previous year.

eCognition automated classification of structures at the Minawao camp in Cameroon.
Image © DigitalGlobe

With no place to go, the displaced usually end up in camps serving tens of thousands of other refugees; the largest camps hold more than two hundred thousand people. While the camps provide food, shelter and medical assistance, financial and material support is limited and a camp’s infrastructure is often overtaxed.

“Refugee camps grow, shrink and move,” says Edith Rogenhofer, a GIS specialist with Médecins Sans Frontières (MSF), one of the non-governmental organizations (NGOs) supporting refugee camps. NGOs like MSF are skilled at resource allocation. To optimize the use of these resources, they need accurate information on the camp’s population.

But good data is hard to come by. Aircraft (both manned and unmanned) and satellites can capture aerial images of the camps, but manually extracting reliable population data from these photos can be painfully slow. That is why MSF is teaming up with experts at the University of Salzburg’s Department of Geoinformatics (Z_GIS) to apply geospatial technologies for social, economic and environmental purposes. Z_GIS is conducting pioneering research in the use of remote sensing such as satellite imagery with advanced image processing techniques to monitor populations. One of its key objectives is developing automated approaches to extracting population information from satellite images.

“Because crises can produce rapid changes in populations, it’s essential to be able to develop accurate data quickly and to repeat the measurements as needed,” says Dr. Stefan Lang, division head and associate professor at Z_GIS. “Once we capture a particular area then we try to do recursive monitoring. It’s important to have tools that we can use to repeat our analysis and not start from scratch.”

To measure the populations, Z_GIS obtains VHR imagery (less than 1 meter per pixel) from commercial suppliers such as Digital Globe and Airbus (Pleiades). The images are processed using Trimble® eCognition® software, which produces estimates on the number of dwelling units in a camp. 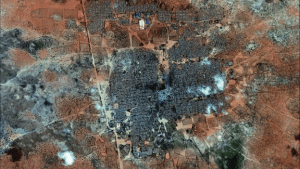 Satellite image of the Dadaab camp in Kenya taken in June 2015, when the camp was home to more than 400,000 Somali refugees. Image © DigitalGlobe

The results can be displayed graphically using visualization and GIS tools such as ArcGIS or Google Earth to provide geographic context. Teams can then add ground data on the average number of residents per dwelling, which enables them to estimate the size and distribution of the population. The process can be repeated over time to quantify population change and movement within a camp

eCognition uses an approach called Object-Based Image Analysis (OBIA) to identify and classify features in an image. According to Dr. Dirk Tiede, one of Lang’s colleagues at Z_GIS, OBIA offers greater flexibility and efficiency than earlier pixel-based analysis techniques. Tiede develops specialized processes (or rule sets) that effectively train eCognition to recognize and classify individual features within an image. The goal is to identify manmade structures and differentiate dwellings from other camp buildings such as food stations and medical facilities.

Working in the Cognition Network Language (CNL), Tiede and colleagues have developed master rule sets that can be transferred and adapted to work in different camps or at different times in the same camp when the environment has changed. The rule sets are designed to minimize the number of absolute thresholds for detecting and classifying features. It also seeks to minimize the use of spectral differentiation in classification.

The developed rule sets use edge detection algorithms to delineate camp margins and to classify manmade features. The spatial characteristics of different dwelling types along with relative spectral differences between objects enable the rule sets to distinguish light-colored dwelling structures from darker buildings and fences. The system determines the spectral values to separate dwelling types as well as areas with and without vegetation based on specific spectral ranges or vegetation indices such as the Normalized Difference Vegetation Index (NDVI). These values are saved as variables within the rule set. They can then be used automatically in the calculations and combined with other independent spectral parameters.

The initial master rule set was developed using archived QuickBird imagery of the Zam Zam camp in Darfur. To demonstrate transferability, the rule set was used on QuickBird images of the camp taken in years prior to and following the original dataset. Additional tests used imagery from GeoEye-1 satellite at camps in Darfur. Tiede said that the primary challenges came from varying vegetation at the new sites as well as the varying characteristics of the satellite sensors. The rule sets could be adapted using visual inspection on the computer screen and redefining the appropriate spectral thresholds for structures and the NVDI for vegetation.

In complex situations, when camps show a very diverse set of structures or several development phases (such as the refugee camp of Minawao, Cameroon), the automated object detection is combined with manual image interpretation. This hybrid approach enables eCognition users to conduct automated and manual analyses and quality checking.

“There are a lot of situations where we need the software to adapt quickly,” says Tiede. “In some camps, the United Nations is providing very brightly colored tents. The tents stand out in the imagery and a given rule set works quite well. But if there was a sandstorm the day before the satellites pass and everything is covered in brownish dust, then we need to adapt the rule set for the fact that the tents are now nearly the same color as the ground. For some camps we are delivering a new map and results every few months. To do that, we need to integrate the results from the previous analysis.” 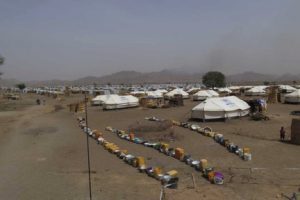 Buckets, jugs and bowls hold places in queues at a water station at the Minawao camp. In some locations, water must be trucked into the camps. Image by Naoufel Dridi, MSF

Because refugee camps change quickly, population monitoring relies on rapid acquisition and processing of satellite data. Once imagery is acquired, the main bottleneck occurs in image processing. But thanks to more efficient algorithms and faster computing technology, eCognition—once the rule-set is developed—can use the distributed computing possibilities of eCognition Server to analyze an entire VHR satellite scene in just a few minutes.

One of Z_GIS’s first projects with MSF was at the Dadaab Complex, a refugee camp in eastern Kenya and home to more than 200 thousand Somali refugees. Z_GIS used the project to develop and refine eCognition processes needed to count the camp’s dwellings.

Dadaab has since been supplanted in size by the Bidi Bidi settlement in Uganda, with roughly 285 thousand inhabitants. In total, camps in Uganda now house more than one million people. eCognition’s ability to adapt to different situations enables Z_GIS to keep up with the changes.

Satellite imagery supports NGOs in more than just population estimates. Organizations try to avoid the expensive and risky practice of delivering water by trucks. Z_GIS can locate water sources close to a camp using lower resolution imagery from the European Sentinel or U.S. Landsat satellites. The images allow Z_GIS to develop an overview map of the geo-hydrological situation. While they can’t see specific well sites they can narrow down where they are by geological features and the hydrological regime.

Natural disaster recovery efforts also benefit from satellite imagery in analyzing the extent and nature of damage. This information is valuable to first responders as well as for longer-term recovery. Following the devastating earthquake in Haiti, Z_GIS developed a damage map within two days after the event. Researchers used eCognition to identify collapsed buildings following severe earthquakes in Italy. In emergency situations like earthquakes, the turnaround time is critical. Usually, the urgency is not as great for refugee camps, although for highly dynamic situations such as the current Rohingya crisis in Bangladesh, timeliness indeed does matter.

The Growing Use of Geoinformation

As the number of people forced from their homes increases, so does the pressure on the NGOs. Working on a project named EO4HumEN+: Extended Earth Observation-based Services for Dynamic Information Needs in Humanitarian Action, Lang and his team are developing more applications to support humanitarian aid. The ongoing project will focus on refining and increasing automated analyses to provide realistic population data.

Tiede and colleagues are working to improve workflows around the automation processes to further reduce time and staffing required for analyses. He is building applications and eCognition solutions with the goal of producing initial data for a camp very quickly. From there, the team can refine and build on the results to produce temporal information on population dynamics. 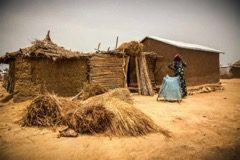 A typical dwelling at the Minawao camp in Cameroon. Image processing helps distinguish residential structures from other buildings in the camp. Image by Louise Annaud, MSF

Under Lang’s coordination, the humanitarian team at Z_GIS continues to work closely with MSF and other NGOs, including the Red Cross movement, SOS Children’s Villages and Action Against Hunger, who rely on the geospatial information. “Z_GIS is an important partner for everything related to Earth observation,” Rogenhofer says. “They are highly respected within the MSF movement for the analysis they provide to us.”

With this success comes a demand for qualified people to perform image processing and analysis for these aid organizations. To meet this need, Lang is teaching a course titled “Geo Humanitarian Action,” where students learn to use eCognition and OBIA to perform the processing needed by these agencies.

The work by Tiede, Lang and their colleagues has produced a stable, operational service to support NGOs in humanitarian aid. It is a powerful example of the value of earth observation and analysis in humanitarian aid. Natural disasters and other crises will continue. Putting advanced tools in the hands of dedicated specialists makes it possible to provide better and faster relief to those in need.

John Stenmark is a writer and consultant working in the geospatial, AEC and associated industries. He has more than 25 years of experience in applying advanced technology to surveying and related disciplines. He may be contacted at [email protected].