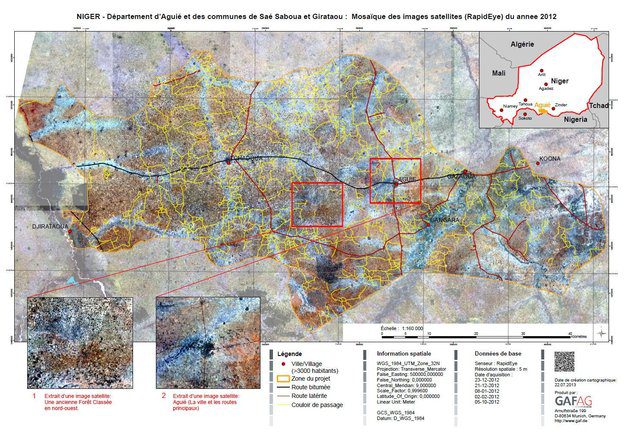 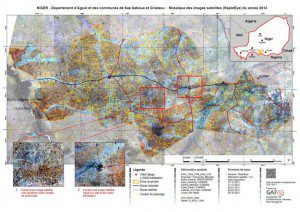 This false-color map derived from satellite data over the Aguie region in southern Niger shows lines (in yellow) indicating corridors of movement. These lines, which look like roads, actually are passages for livestock herding. This information allows organizations to monitor how animals are transported and the effect on agriculture. The routes also cross borders and affect local markets.

Satellites observe defined lines of nomadic pastoralism in one of the world’s poorest countries to ensure food security and support small-scale rural producers.

Landlocked in western Africa, Niger is one of the world’s poorest nations. With less than 4 percent of the country’s land arable and prone to drought, food security is a major concern for the population of more than 17 million.

Livestock production is important to the agricultural gross domestic product, with widespread nomadic pastoralism. Livestock trade is organized through strong traditional networks, with most animal sales taking place in local markets, but nomadic herders continuously move depending on water and food availability.

While preparing these maps, a team from the geoinformation service provider GAF pinpointed the importance and localization of a network of corridors that don’t correspond to the regular road maps but show passages for livestock. This network links pastures, water points and grazing areas in villages and farmland. Established to prevent conflicts between farmers and herders over the use of land and scarce water resources, the corridors are regulated by the Rural Code, a national law defining the rights to land use by pastoralists.

Analyzing these corridors yields detailed insight into livestock movement in the region. This information can help IFAD with agricultural development and project planning in the areas of water supply, forage supply, livestock markets and the cross-border transfer of animals.