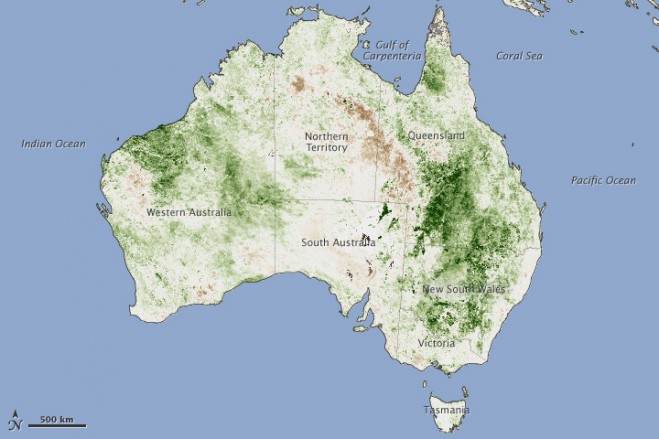 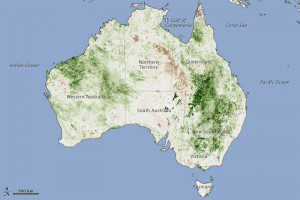 This map is based on Normalized Difference Vegetation Index (NDVI) data collected by the AVHRR instrument on the NOAA-18 satellite. It shows vigorous vegetation growth across eastern Australia, with dark green areas depicting significantly more vegetation than in the 2006–2009 base period.

In Australia, dry conditions are so common that even in the middle of a comparatively wet summer, large swaths of land (especially the desert interior) can remain parched and largely devoid of vegetation. However, as was the case in 2010 and 2011, the summer has shaped up to be a wet one across the eastern portion of the continent. The greening was particularly noticeable in the northwestern part of New South Wales and southern Queensland.

“These are dry areas dominated by grasses, shrub, and herbs that are particularly sensitive to changes in precipitation,” said James Collatz, a land cover and carbon cycle specialist at NASA’s Goddard Space Flight Center. “The greening means we’re going to see a significantly higher risk of wildfire in the same areas in the coming months.”

The excess rain will have other impacts. “We’ll likely see bumper harvests for most crops grown in Eastern Australia,” said Assaf Anyamba, a remote sensing scientist with the Goddard Earth Sciences Technology Center at Universities Space Research Association. “The rainfall, combined with abundant vegetation, will also create the ideal conditions for the production of mosquitoes that spread Murray Valley encephalitis and Kunjin virus disease.”