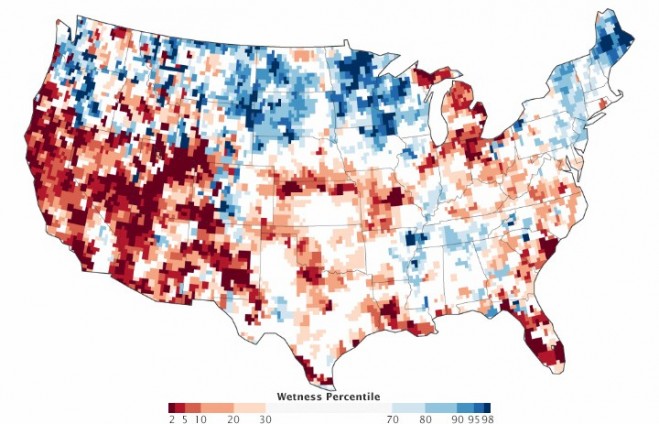 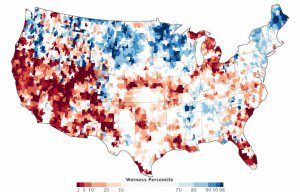 This map combines data from NASA’s GRACE satellites with other satellite and ground-based measurements to model the relative amount of water stored in underground aquifers in the continental United States. The map depicts the amount of groundwater on July 7, 2014, compared with the average from 1948 to 2009. Areas shown in blue have more abundant groundwater for this time of year than comparable weeks over the years, whereas shades of red depict deficits.

New maps created with satellite data are an experimental product used by the U.S. Drought Monitor and supported by NASA’s Goddard Space Flight Center. The measurements are derived from observations of small changes in Earth’s mass and its gravity field—features that are affected by the movement and storage of water and ice around the planet.

The extent of drought in the U.S. Southwest is reflected in the accompanying Gravity Recovery and Climate Experiment (GRACE) map. California, Nevada, New Mexico, Colorado, Texas, Arizona, Oklahoma and Nebraska have been suffering from various degrees of long-term drought that has parched the land surface and prevented the replenishing of groundwater below.

However, some other odd juxtapositions appear. The Pacific Northwest states of Oregon and Washington are suffering through raging wildfires, as months of hot weather have dried out forests. But according to the groundwater data, conditions underground are normal to wet—likely a reflection of the long lag between the accumulation and depletion of water underground and the changes in conditions on the surface. Those states had wet winters, but the heat and dryness of spring and summer haven’t yet penetrated the underground storage.