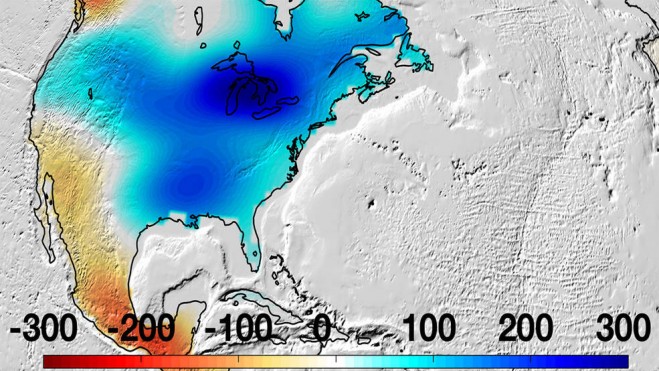 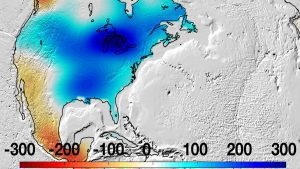 North America was almost entirely above its long-term average in mass in May 2019, due to Midwestern flooding, with the runoff raising the Great Lakes to record levels. (Credit: NASA/JPL-Caltech)

In May 2019, after the wettest 12 months ever recorded in the Mississippi River Basin, the region was bearing the weight of 8 to 12 inches (200 to 300 millimeters) more water than average. New data from NASA’s Gravity Recovery and Climate Experiment Follow-On (GRACE-FO) mission, which launched in May 2018, showed there was an increase in water storage in the river basin, extending east around the Great Lakes.

Data from the twin GRACE-FO spacecraft are used to measure the change in the mass of water across the planet, providing scientists, decision makers and resource managers with an accurate measure of how much water is retained—not only on Earth’s surface, but also in the soil layer and below ground in aquifers. Monitoring these changes provides a unique perspective of Earth’s climate and has far-reaching benefits for humankind, such as understanding both the possibility and consequences of floods and droughts.