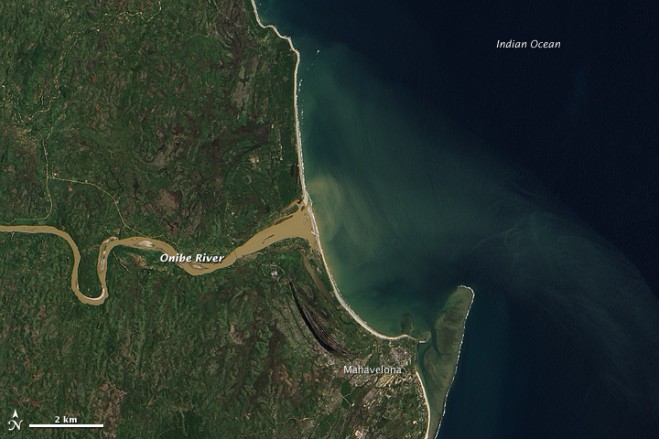 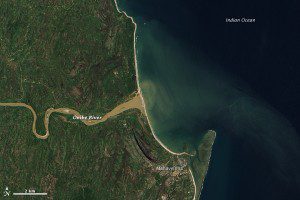 The ALI instrument on NASA’s EO-1 satellite captured this natural-color image of Madagascar’s sediment-choked Onibe River on Feb. 19, 2012, after Tropical Cyclone Giovanna dumped more than 10 inches of rain on the island nation.

Tropical Cyclone Giovanna recently sported winds of 125 knots (230 kilometers per hour) and heavy rains in excess of 250 millimeters (10 inches) along Madagascar’s coast. OnFeb. 20, 2012, the Integrated Regional Information Networks reported that Giovanna had damaged or destroyed thousands of homes in Madagascar and killed at least 23 people.

The Advanced Land Imager (ALI) on NASA’s Earth Observing-1 (EO-1) satellite captured this natural-color image of the sediment-choked Onibe River on Feb. 19. The river appears muddy brown throughout this landscape and delivers a thick plume of sediment to the Indian Ocean.

The Onibe River arises in the highlands of Madagascar’s interior and empties into the ocean just north of the coastal town of Mahavelona (also known as Foulpointe). The river lies along the track Giovanna followed when it came ashore. Giovanna’s heavy rains spurred equally heavy runoff into the Onibe River.

In eastern Madagascar, rivers are typically short and more quickly, thanks to the area’s stark relief. Madagascar’s highest mountain, for example, is 2,876 meters (9,436 feet) above sea level yet lies just 120 kilometers (75 miles) from the coast. The steep slopes lead to significant erosion, but even compared to the island’s usual runoff rates, the Onibe carried a heavy load of mud and debris in the wake of Giovanna. An ALI image of the same area on Feb. 6 showed virtually no sediment plume at the mouth of the river.

Cyclones rank among Madagascar’s most frequent natural hazards. After coming ashore in mid-February, Cyclone Giovanna blew westward over the island, traveled southward through the Mozambique Channel, then curved back to the east, skirting Madagascar’s southern shore.