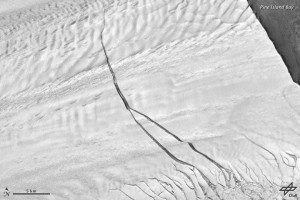 When the colossal crack shown in the accompanying TerraSar-X satellite images reaches the other side of the Pine Island Glacier ice shelf, it'll send the largest iceberg in decades adrift into Pine Island Bay.

On Oct. 14, 2011, NASA Operation IceBridge scientists flying over Antarctica's Pine Island Glacier (PIG) made a startling discovery: a massive rift running about 29 kilometers (18 miles) across a part of the glacier's floating tongue. The rift was 80 meters (260 feet) wide on average and 50 to 60 meters (170 to 200 feet) deep. 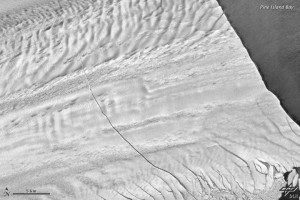 Rifts similar to this form on PIG's ice shelf every five to six years. What makes this one remarkable is that it will lead to calving of a significantly larger iceberg than PIG has produced in the last few decades, noted Joseph MacGregor, a research scientist at the University of Texas at Austin. It's likely that the front of PIG will be farther back than any time in the recent past after the iceberg calves.

Satellites observed large icebergs calving off PIG in 2001 and 2007, but upcoming IceBridge flights offer an opportunity to monitor a calving event from closer range. Operation IceBridge resumed science flights with NASA's DC-8 on Oct. 12, 2012. Scientists participating in the mission will be watching the crack closely for any new signs of change.

Images courtesy of NASA and the German Aerospace Center.