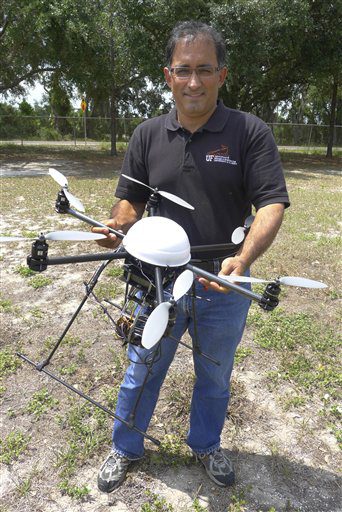 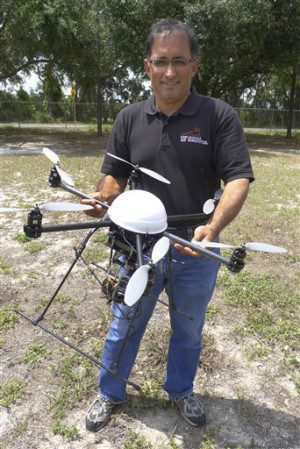 University of Florida citrus researcher Reza Ehsani holds a miniature unmanned helicopter fitted with a camera to monitor crops from the air.

To get more information about crop growth, University of Florida researchers attached a Global Positioning System (GPS) device under the domed top of an unmanned aircraft system (UAS) and expensive camera equipment to its belly. Using GPS coordinates, researchers can visit an area more than once, snapping high-resolution images from above. The photos help researchers and farmers do everything from count individual trees and detect problems with watering to monitor the deadly citrus greening disease, a vital task in Florida.

The Florida researchers’ technology also has been used for crops in Oregon, Nebraska, Arkansas and even Malaysia. It costs between $3,000 and $20,000, depending on the size of the model chopper and sophistication of the camera. The images are then downloaded and scrutinized with computer programs. “We want to be able to see individual leaves,” says Reza Ehsani.

He and other researchers have looked into aerial crop monitoring for years with limited success. Full-sized helicopters and fixed-wing airplanes flown by a human pilot were too costly for most farmers to use regularly. Scheduling flight time and weather also hampered repeat monitoring. And photos weren’t great because the planes and helicopters couldn’t get close to the crops.

Ehsani also considered using more traditional remote-controlled planes to take photos. “You have to have a very well-trained pilot,” he laughs. “The plane crashes, and you lose your expensive sensor and camera.”

Enter the Mikrocopter. Made in Germany, the helicopter varies in size and power. Some models have four rotors—others six or eight. The Florida researchers modified it—Ehsani acknowledged the tweaks required some electronics know-how—and mounted a swiveling carriage at the bottom so the camera will always be steady, even under windy conditions. The six-rotor copter can carry about 5 pounds in weight and fly for more than a half hour. It’s powered by a lithium ion polymer battery.

The Florida team can put different cameras on the helicopter so it can take various types of photos. In Oregon, the members helped a farmer at a nursery count potted trees. In Malaysia, they checked out the size and height of palm trees grown for oil. Richard Ferguson of the University of Nebraska has a helicopter on order. He will use it to look at irrigation in the state’s corn crops and to research, with his graduate students, nitrogen fertilizer applications and water management. Adds Ferguson, “The aspect of fun also comes in here.”

Dharmendra Saraswat, a professor at the University of Arkansas, calls the contraption “a farmer-friendly unit” that will help the state’s farmers while also saving them money. He saw the helicopter in action when Oregon researchers used it to count the trees in a nursery. When he spoke with farmers in Arkansas about the technology, one pumpkin farmer wondered whether it could help determine the size of each individual pumpkin in his crop.

Saraswat was intrigued. “There is a possibility that if we can count trees, then we can count the size of pumpkins, too,” he says. “We have not characterized the limits of this.”

In Florida, the team used an expensive infrared camera to look at orange trees. The resulting images showed how some trees were fat and green, while others were smaller and lighter. “Healthy trees reflect infrared light,” says Saraswat. “This tells the farmer that something is wrong.”

Monitoring the trees from above is especially helpful for citrus farmers, who have a difficult time determining whether the crop has contracted citrus greening, a bacterial disease that kills the trees. Greening begins at the top of the tree, which is nearly impossible to see from the ground. Although farmers hire people to visually inspect the trees, they are incorrect 40 percent of the time when monitoring, according to Ehsani.

With the tiny helicopter, the treetops are visible in crisp detail. The technology also allows farmers to precisely check the same area of the crop multiple times—something they can’t do on foot or with a larger, piloted aircraft.