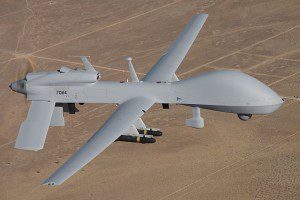 The U.S. government budget for drone warfare has gone from a relatively paltry $667 million in 2002 to more than $3.9 billion, according to a Congressional Research Service report. Shown here is a General Atomics MQ-1C Gray Eagle, reportedly worth about $20 million.

Secured inside a room on the university's campus, you need a U.S. passport to enter a modern arcade of war machines. It looks like a gamer's paradise: A comfortable tan leather captain's chair sits behind four computer monitors, along with an airplane joystick with a red fire button, a keyboard and throttle control.

The games here have great implications. Across the world, a $20 million Gray Eagle drone armed with four Hellfire missiles, ready to make a sortie into hostile territory, is taking commands from a workstation like this one.

Welcome to the new basic training, where the university teaches the skills to fight the war of tomorrow in private classrooms such as this. A graduate of the university's UAS program could be in that other room in as little as six months with a master's degree in drone warfare, his hand on the joystick, making $150,000 a year.