First LDCM Images Great Right out of the Box 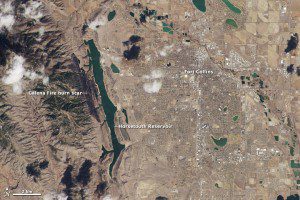 Made with reflected red, green and blue light, this image shows Fort Collins as the human eye would see it. The city is a gray grid surrounded by the curving roads and brown yards of residential neighborhoods. White clouds cast black shadows on the ground below. Land freshly burned in the Galena fire is charcoal black”just slightly darker than the dark green coniferous forest to its west.

On March 18, 2013, the newly launched Landsat Data Continuity Mission (LDCM) began sending images back to Earth from its two sensors, the Operational Land Imager (OLI) and the Thermal Infrared Sensor (TIRS), including these two images of Fort Collins, Colo. 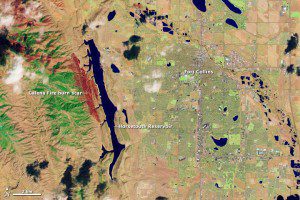 The images are close-up views from the Operational Land Imager (OLI) sensor at its maximum resolution of 15 meters per pixel. One image displays natural color, while the second image blends shortwave infrared, near-infrared and green wavelengths (LDCM bands 7, 5, 3).

The first OLI and TIRS images look great right out of the box, said Jim Irons, LDCM project scientist. I have waited a long time to view the first LDCM images, and I could not be more impressed with their appearance.

LDCM's normal operations are scheduled to begin in late May 2013, after the instruments have been calibrated in orbit and the spacecraft has been fully checked out. At that time, NASA will hand over control of the satellite to the U.S. Geological Survey, and the satellite will be renamed Landsat 8.