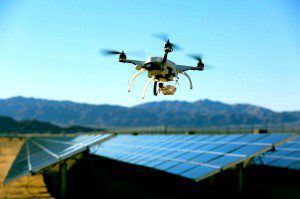 Drones may prove particularly useful at detecting malfunctioning solar panels, which generate a distinctive heat signature as they fail.

Skycatch drones are designed to operate autonomously. When a drone completes a mission, it flies back to a ground station, a 100-pound, 2-by-2-foot box with a circular opening on top. As the drone nears, guided by its camera, the Global Positioning System and a sonar sensor, the ground station uses its own sensors and a radio signal to guide the approach.

Once the drone has landed, a robotic arm removes the battery, which also stores 15 gigabytes of data, and replaces it with a fresh one from a 10-battery carousel. The data then are beamed up to Box, a cloud computing service.

Skycatch is a year-old start-up based in San Francisco that has raised $3.2 million from Google and other investors. The company already has signed deals to test its technology with the construction giants Bechtel and DPR; First Solar, a developer of photovoltaic power plants; and SolarCity, a solar panel installer.