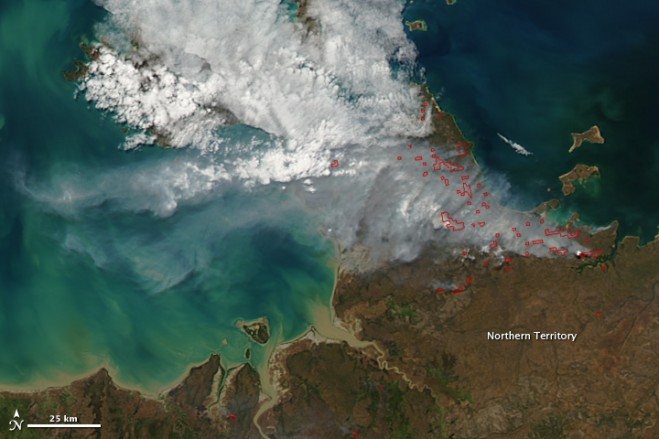 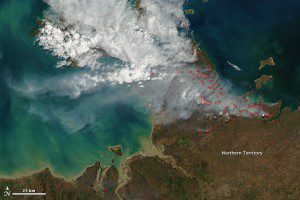 About half of the fires in Australia are started by people; the other half are ignited by lightning.

Winter and spring are fire seasons in northern Australia. During the dry winter months, plants that grew during the rainy summer dry up and become prone to fire. Aboriginal Australians have long used fire to manage land, and many native plants need fire to regenerate. Today, about half of the fires in Australia are started by people, and the other half are ignited by lightning.

The winter fire season often produces large wildfires in Northern Territory, but the most damaging fires in Australian history have been during the summer in the more populous south. This image, taken on July 30, 2011, by the Moderate Resolution Imaging Spectroradiometer (MODIS) on the Aqua satellite, shows several fires burning in Arnhem Land, Northern Territory. The fires are marked in red. Smoke rises from the fires and blends into the clouds over Van Diemen Gulf to the west.

The fires are burning in the Murgenella Wildlife Sanctuary, which is adjacent to Kakadu National Park. Arnhem Land, including the park and the sanctuary, is owned and managed by Aboriginal Australians. The large image, which covers a wider area, shows fires throughout Arnhem Land.