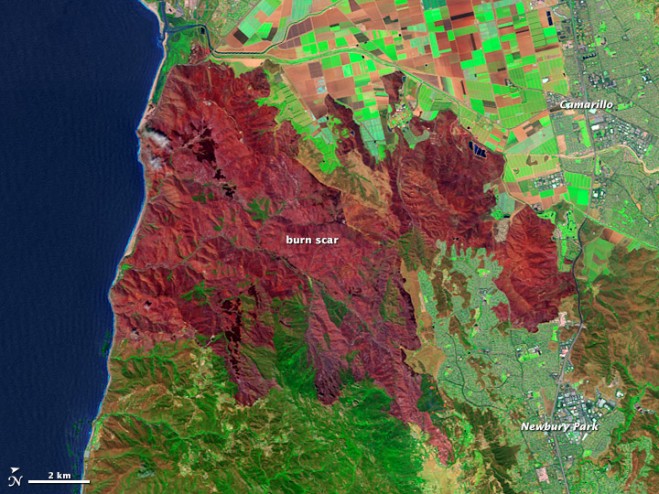 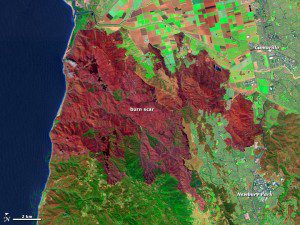 In this false-color image (rotated so north is to the right) from LDCM’s Operational Land Imager, unburned vegetation appears dark green. Burned areas are red, and the most severely burned areas are generally the darkest. Actively growing farmland is light green, plowed fields are brown, and buildings and roads are gray.

Burned Area Emergency Response (BAER) teams often head for the field while the remnants of a fire are still smoldering. These multidisciplinary groups of scientists, which include hydrologists, wildlife biologists, soil scientists, geologists, engineers, botanists, ecologists and foresters, evaluate the severity of a fire and look for additional threats.

The risk of floods, severe erosion and landslides often increases because wildfires consume leaf litter and other organic matter that normally soak up and retain moisture. Vaporized oils from charred leaves also can leave a water-repellent sheen on the soil.

It’s the BAER team’s job to spot such risks as quickly as possible so emergency planners can begin developing responses. The obvious way to do this is to investigate with people on the ground. However, there are times when fires are so large and inaccessible, or when resources are stretched so thin, that BAER teams can’t get to all the fires. Since about 2001, BAER teams have received indispensible help from Earth observation satellites.

Satellite sensors collect data in a variety of wavelengths within the electromagnetic spectrum, some far beyond what the human eye can detect. Certain wavelengths in shortwave and near infrared are especially useful for gauging a fire’s severity. If a satellite passes over at the right time, remote-sensing experts can produce maps of burn severity within hours of the blaze.