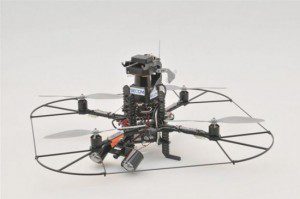 Japanese home security firm Secom says its surveillance drone would be helpful in factories or other large facilities where stationary cameras aren’t able to cover everything. Rentals won’t begin until around April 2014, and will cost about 5,000 yen (approximately $58) per month.

The drone features a set of four rotors and was modeled after similar equipment made by Germany’s Ascending Technologies. The drone weighs only 1.6 kilograms (3.5 pounds) and measures 60 centimeters (23.6 inches) wide.