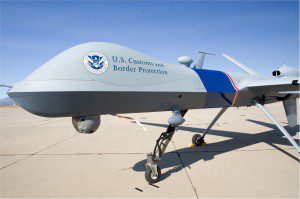 U.S. Customs and Border Protection already uses drones along the U.S.-Mexico border, and the FAA has granted several hundred permits to universities, police departments and other government agencies to use small, low-flying drones.

A future in which drones are as common in U.S. skies as piloted helicopters and airliners is a step closer with a government request for proposals to create six drone test sites around the country.

The Federal Aviation Administration (FAA) made the request on Feb. 14, 2013, kicking off what is anticipated to be an intense competition among states hoping to win one of the sites. The FAA also posted online a draft plan for protecting citizens' privacy from the eyes in the sky. The plan would require each test site to follow federal and state laws and make a privacy policy publicly available.

Privacy advocates worry that a proliferation of drones will lead to a surveillance society in which the movements of citizens are routinely monitored, tracked, recorded and scrutinized by the authorities.

The FAA plans to begin integrating drones starting with small aircraft weighing less than about 55 pounds. The agency forecasts an estimated 10,000 civilian drones will be in use in the United States within five years. The FAA is required by a law enacted a year ago to develop sites where civilian and military drones can be tested in preparation for integration into U.S. airspace that’s currently limited to manned aircraft.

The law also requires that the FAA allow drones wide access to U.S. airspace by 2015, but the agency is behind schedule. The test sites are planned to evaluate what requirements are needed to ensure the drones don’t collide with planes or endanger people or property on the ground. Remotely controlled drones don’t have a pilot who can see other aircraft the way an onboard plane or helicopter pilot can.