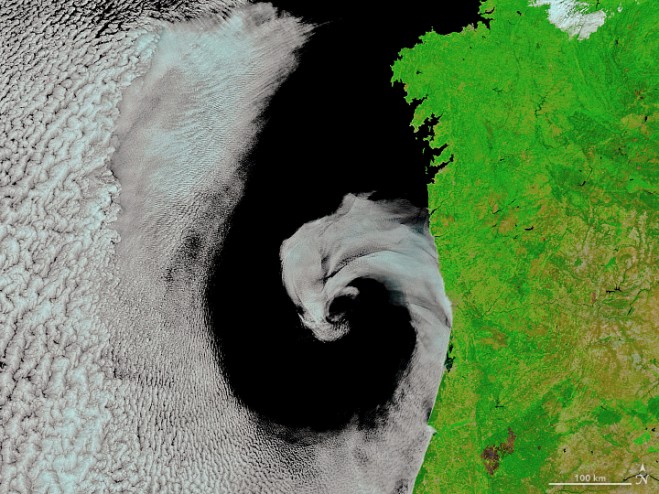 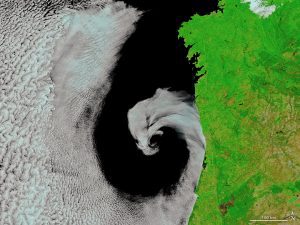 This image was composed with visible and infrared light (MODIS bands 7-2-1), a combination that highlights the contrast between clouds and land. (Credit: NASA Earth Observatory image by Joshua Stevens, using MODIS data from LANCE/EOSDIS Rapid Response)

Cyclones that form over Earth’s mid-latitudes often are memorable for the wind, rain and tornadoes they can spawn. But not every one of these low-pressure systems delivers severe weather.

On July 16, 2017, the Moderate Resolution Imaging Spectroradiometer (MODIS) on NASA’s Terra satellite captured this image of cyclonic rotation off the coast of Portugal. In the vicinity of the Iberian Peninsula, these low-pressure systems are relatively slow-moving and tend to be poorly developed in summer; they often form clouds without any precipitation.

“A slow-moving cyclone over the Portuguese coast sucked in dry, cloud-free air from the Iberian Peninsula and moist, cloudy air from the Atlantic, forming a spiral,” said Peter Knippertz, a meteorologist at Karlsruhe Institute of Technology. He notes that the clouds wrapped up in the circulation appear to be marine stratocumulus.