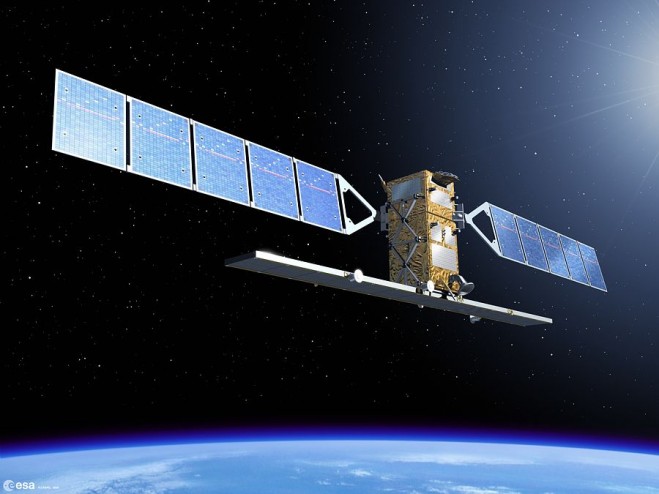 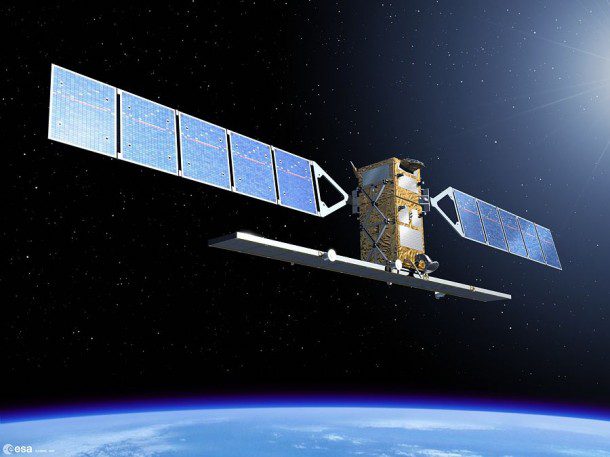 Satellites such as Envisat with synthetic aperture radar (SAR) capabilities may play a key role in global carbon capture and storage.

Test sites in the Netherlands, the United Kingdom and elsewhere indicates a growing need to address the lack of existing infrastructure currently in place to capture CO2 from industrial and power generation plants and store it in underground reservoirs available in the form of previously exploited oil and gas fields or other alternative storage sites/technologies.

Over the last two years the European Space Agency (ESA) has been funding a project aiming to establish a “service concept” based upon satellite Earth Observation (EO) technologies that could be applied to industry and government, and that would support the establishment and monitoring of CO2 capture and storage facilities as part of future emissions-reduction and carbon-trading initiatives.

Project participants included SciSys UK (lead), a company that has worked in all aspects of the space industry for many years from ground stations to on-board satellite software; Fugro NPA Ltd. (UK), an acknowledged world leader in EO and specifically terrain-motion mapping from space; TNO, the largest fully independent research, development and consultancy organization in the Netherlands; the British Geological Survey, which is actively involved in the monitoring of many of the carbon capture and storage (CCS) sites; and AEA Technology, which provides user consultants and expose service concepts to key stakeholders within the industry.

Conventional EO-based geological mapping is regarded as a routine tool used by most oil and gas producers when exploring for new reserves, planning surveys and establishing baselines for the monitoring of sites. However, its wider application to CCS may not be relevant, as most if not all CO2 to be stored is envisaged as filling existing, commercially depleted reservoirs where the geology has been largely determined during the discovery phase.

Ecosystem analysis to detect indications of vegetation stress linked to gas seepage and other factors is reasonably well developed using EO techniques and data sources available today, although not necessarily at resolutions always applicable to specific CCS sites. One of the research areas of CO2GeoNet (www.co2geonet.com), a nonprofit association joining together 13 partners spanning 7 European countries, is that of testing remote sensing monitoring technologies for potential CO2 leaks. Work has been carried out in an area near the town of Latera in Lazio, Italy. This geothermal area, in a collapsed volcanic caldera, has long been known to have natural gas leaks and as such acts as a natural analogue to a leaking geological store of CO2. Since 2005 the indirect detection of CO2 via its effect on vegetation health has been studied using airborne multispectral and hyperspectral sensors in the visible, near and thermal infrared regions of the electromagnetic spectrum. Methodologies developed have been extrapolated to the lower spatial resolution of satellite-based sensors to investigate their use.

Pipeline routing and monitoring are well-established remote sensing techniques but are normally aircraft and/or GPS-based. Pipeline monitoring can be accomplished using time-sequence aerial photography. Analysis of temporal change in the vicinity of the pipeline can provide information on nearby hazards such as landslides.

Terrain-motion
Many potential storage sites are depleted oil or gas reservoirs, which implicitly have already been mapped in minute detail. The project concluded that monitoring applications were of most interest, and the most relevant of these was terrain-motion mapping using Synthetic Aperture Radar Interferometry, or InSAR for short. The rest of this article, therefore, focuses on applications of InSAR for CCS.

InSAR technology is already widely used in the oil and gas industry to measure the integrity and optimize the productivity of onshore reservoirs. Depending on target characteristics and the temporal distribution of SAR data used, relative accuracies of better than 1mm displacement can routinely be achieved. When this accuracy is combined with the wide-area coverage that characterizes satellite EO, a unique and valuable tool is provided with many applications, one of which can be the monitoring of terrain-motions related to the CCS life-cycle. For example:

2. Transportation, i.e. pipeline routing and integrity monitoring: Besides monitoring general terrain-deformation, the main use for InSAR in this area is landslide mapping where potential slides might mean a re-routing of a proposed new pipeline, or for the risk management of slopes carrying an existing infrastructure.

3. Analyses of plume migration as a surface expression: In some circumstances, InSAR can be used to map CO2 migration through the reservoir as an expression of surface terrain deformation.

4. CCS-injection-facility integrity monitoring: InSAR can be used to access the general, relative stability of a CCS pumping facility, e.g. effects of differential subsidence could lead to leaks and blowouts.

Note that appropriate SAR data availability for ongoing monitoring is assured by several different missions, not least ESA’s Sentinel 1a and 1b radar satellites, due for launch next year as part of Europe’s Global Monitoring for Environment and Security initiative, which will provide continuity to the invaluable SAR data archive already established since 1991.

Since 1991, European Space Agency satellites (ERS-1, ERS-2 and Envisat) carrying Synthetic Aperture Radar (SAR) instruments have been consistently acquiring data across the world, establishing an archive of over 1.5 million images. These systems have since been augmented by a number of other SAR satellites operated by other agencies (in particular the Canadian, German, Italian and Japanese space agencies), providing yet further opportunity for analyses. SAR images contain information about the position of the terrain at the time of image acquisition. As subsequent images are acquired over the same location they can be compared and used to map relative terrain-motion. This principal forms the basis of InSAR.

A range of InSAR techniques have been developed to extract optimal information from SAR imagery. Of particular importance for the CCS industry is a hybrid technique known as Persistent Scatterer InSAR (PSI). PSI allows relative sub-millimetric measurements to be made against individual, radar-reflective terrain-features that provide a persistent response in each SAR image. These “persistent scatterers” (or “virtual GPS points”) generally correspond to parts of man-made structures, though they can also include bare rocks and outcrops. They act as persistent scatterers because of their serendipitous geometry, surface-roughness and electrical conductivity. The exact location of persistent scatterers cannot, therefore, be accurately predicted in advance of processing, but over urban areas their densities are usually measured in the hundreds per square kilometre (thousands with the latest high-resolution SAR imagery). The unique products derived from PSI include average annual motion maps and the motion history of individual scatterers, both covering the time-span of the dataset used, e.g. 1992 to the present day. The capability of PSI allows users to uniquely interrogate historical information (although PSI can also be used for up-to-date monitoring campaigns), an ability not possible with conventional surveying methods. The PSI technique was rigorously validated during a specific campaign over sites in the Netherlands during Stage 2 of the ESA Global Monitoring for Environment & Security (GMES) project Terrafirma, and is now widely used by dozens of national geoscience organizations across Europe.

The idea of using InSAR for the monitoring of CCS reservoirs first evolved from results obtained monitoring the inverse, i.e. gas and oil production where depletion of certain reservoirs cause a surface expression of subsidence. Such measurements proved to be of use to practitioners in understanding ‘compaction-drive’ and fluid dynamics. It was a natural progression to apply similar techniques to the reverse, to the injection of fluids into reservoirs, where the natural elasticity of the cap rock would heave in sympathy with increased reservoir pressure.

In Salah is a world leading industrial scale CCS project located in central Algeria. The project, a joint venture initiative between BP, Sonatrach and Statoil, has been in operation since 2004. CO2 is separated from natural gas produced from three fields of Krechba, Reg, and Teguentour and is re-injected into the Krechba Carboniferous Sandstone reservoir via three long (1,500m) horizontal wells at a depth of around 1,900m.

In 2005 a Joint Industry Project was set up to monitor the CO2 storage process using a variety of geochemical, geophysical and production techniques over an initial 5 year period. InSAR has been used to better understand the impact of gas production and CO2 injection on the terrain, and provide a deeper understanding of reservoir characteristics.

Fugro NPA Ltd have carried out a proprietary study of the impact of In Salah production/storage activities on the regional terrain using PSI. The quantity of satellite SAR imagery archived and available across the Krechba field, as well as the local ground cover conditions (dry, vegetation-free rocky desert) were key prerequisites for the application of PSI to this area.

PSI was undertaken using 50 archived SAR images (acquired by ESA’s Envisat satellite), spanning a 7 year period (July 2003 to September 2010). High densities of measurement points, 406 per km2, were observed across the reservoir. PSI was successful in identifying four domains of terrain motion. Mapping these features against well locations highlights a correlation, along a northwest axis, with natural gas production (subsidence), enveloped to the north and east by three smaller domains of motion that relate to CO2 injection (heave). Subsidence rates along the axis KB-CA/CB/CC/CE approximate -2.9 mm/year, as opposed to +4.7mm/year at heave locations KB-501/502/503. The match between terrain deformation and evidence from subsurface data for the movement of CO2in the reservoir is intriguing. If PSI data can be calibrated against aspects of the injection dynamics, then the opportunity exists in certain circumstances for the remote monitoring of CO2 movement in the subsurface.

Elsewhere, PSI has been used to measure terrain heave associated with a gas storage facility located in the western region of Berlin, Germany. PSI was used to enhance measurements derived from ground leveling campaigns which, although highly accurate, only provide readings over a coarse network of measurements and are inherently time consuming and costly. PSI was integrated into the study with great success; movement correlated well with an increase in borehole head pressures resulting from gas injection. It was determined that PSI can be used effectively to monitor the initial phases of gas storage operations.