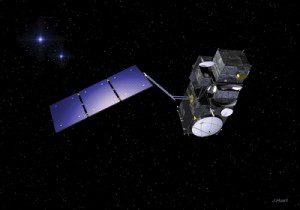 ESA is developing Sentinel-3 for the GMES program to support ocean forecasting systems, as well as environmental and climate monitoring.

The European Commission (EC) has already kicked off months of wrangling among the 27 members of the European Union (EU) after a draft budget plan abandoned future funding for the Global Monitoring for Environment and Security (GMES) project. Despite having sunk â‚¬2.3 billion ($3.16 billion) into the flagship Earth-observation project to date, the EC plan would shift the burden of GMES operations funding to individual member states, a gamble that could spark protests from EU member governments and carries significant political risk.

Abandoning GMES would mean giving up on Europe's ambition to take the global lead in environmental monitoring ”a goal well within its grasp. Likewise, a plan to allow private companies to sell some GMES data products and services to the EU would suffer, compromising the health of Europe's commercial space sector. Europe's attempt to federate its military surveillance capacity could be undermined to the extent that GMES has a security element. The EC also risks compromising a potential increase in European autonomy and bargaining power, which GMES would surely bring to the table as the EU seeks to become a bigger player in the international community.

Launched in 1998 by the EC, theESAand several national space agencies, GMES is often overshadowed by Galileo, Europe's long-awaited satellite navigation system. The two comprise the EU's top strategic objectives in space as designated flagship programs. Unlike the EU-owned Galileo, however,ESAofficials assert GMES is running on time and within budget.

The two-day meeting this week offers a chance for different actors”particularly those within the EC”to give voice to current thinking given the uncertain fiscal environment that sets the stage for a new multiyear spending cycle in 2014.

Christophe Venet, an analyst at the Institut Francais des Relations Internationales, asserts the EC's decision to deny â‚¬834 million in annual operations and maintenance funding for GMES was abrupt and unexpected, given that the commission's past support for the program has been steadfast.It is a complete contradiction with everything the commission has published or released or officially declared on GMES in the previous years, Venet said.

The decision was widely criticized within Europe's small Earth-observation community, as well as byESA, the largest financial contributor to the project to date. ESAis a very central stakeholder in GMES, Venet said, having funded most of the R&D work on the project's dedicated Sentinel series of satellites.

Shortly after the EC budget proposal was issued in June,ESAlaunched an intense lobbying campaign, flooding member governments with letters urging a protest. By September, members of the European Parliament had voiced their concern to EC President Jose Manuel Barroso, asserting GMES is arguably the most politically and technically advanced environmental monitoring initiative in the world.

It has the potential to place Europe at the head of environmental monitoring, risk and security management whilst providing invaluable information to European decision-makers and citizens, nearly 50 members of the parliament wrote. Unfortunately, the EC abandons the GMES program as it proposes to have it financed outside the EU budget.

For years the EC has come under pressure from richer member states, including Germany and the United Kingdom, to curb spending as smaller members struggle to keep their own budgets in check. Last year the leaders of Finland, France, Germany, the Netherlands and the United Kingdom demanded an EU spending freeze that would allow growth only to account for rising inflation.

Even the EC acknowledges the uncertainty that could result for GMES if the funding isn't restored. It would be more than likely that this option would mean a discontinuation of GMES, as no other partners would be in a position to take over the prominent role played so far by the EU in structuring and supporting”both politically and financially”GMES, according to an EC staff working paper. It would lead to sunken costs, and past investment would be lost.

GMES is designed to deliver accurate and timely data to the public that would bolster environmental management and climate monitoring efforts and ensure civil security.ESAis developing five families of Sentinel missions specifically for the GMES space component, the first of which is scheduled to launch in 2013.

An ambitious Earth-observation program comprised of existing (Spot and Cosmo-Skymed) and new satellites (the Sentinel series), GMES will provide timely data on environment and security to public users. The program is already delivering services to users: A preoperational phase was launched in 2008, and initial operations are expected to start by 2014.

For now, GMES funding under the current multi-year financial plan remains in effect through the end of 2013. But Venet says decisions to fund and manage the program beyond that time must be taken in the coming months.

Decisions made among the member states to fund development and launch of future batches of GMES satellites are not something you can decide a couple of months ahead of time, Venet said.

As senior policy officials meet this week, the clock is still ticking on a draft common strategic framework for all EU funds. This is only the first proposal by the EC, not the definitive text, Venet said, adding that the commission is expected to complete a common strategic framework for all EU space programs by year's end, a legislative proposal to be debated by members of the European Council and European Parliament during the next two years before a final multi-year spending plan is approved for 2014-20.

One complicating factor is that funding for the operations and maintenance portion of GMES is intrinsically linked to its ownership, a key element of the program yet to be decided.

For now, GMES is supervised by the EC, which has the political mandate to manage it. But at the practical level, day-to-day oversight is led byESA, a research and development agency with the technical know-how to define and develop systems, but which isn't politically or financially equipped to govern their use.

Venet says GMES and other space priorities must be viewed within the context of Europe's financial meltdown. The financial crisis in Europe is an important factor to take into account, he said.

Despite public discourse among member states insisting on the strategic nature of space and the new economic model GMES could provide, sorting out ownership and funding remains a challenge, at least in the near-term as Europe puts its financial house in order.

I think the program will go on, but I don't imagine all these crucial questions are to be solved by the end of the year, Venet added.