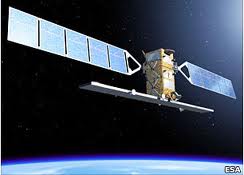 The first Earth observation satellite in Europe’s Copernicus system, Sentinel 1A, shown in this artist’s drawing, is scheduled to launch in February 2014.

The European Commission agreed to permit free access to data from its Sentinel series of Earth observation satellites, the first of which is scheduled to launch early next year.

The commission concluded that any harm to private-sector satellite operators will be outweighed by the expected growth in value-added services derived from the data. After a long process of evaluation that included input from the European Association of Remote Sensing Companies (EARSC), an association of private-sector providers of Earth observation data, the commission agreed to align itself with a policy already adopted by the 20-nation European Space Agency (ESA).

ESA and the commission, which is the executive arm of the 28-nation European Union, already have spent some 3.2 billion euros ($4.2 billion) on an elaborate space-based Earth observation network, including the fleet of Sentinel optical and radar spacecraft. Once called the Global Monitoring for Environment and Security system, it’s now called Copernicus. The system’s ownership is gradually transferring from ESA to the European Commission.