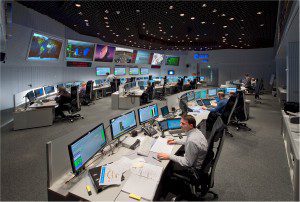 Drawing on sophisticated software that keeps European Space Agency (ESA) satellites on track, Spanish railways now have their own high-tech upgrade to let travelers know when the next train will pull into the station.

The train system was developed by a group of Elecnor Deimos engineers who had worked extensively on ESA projects. The outcome of this technology transfer is that up-to-date train schedules now are displayed at more than 400 Spanish stations.

This came about as a result of the team's work with ESA's largest satellite, Envisat, said Carlos FernÃ¡ndez de la PeÃ±a, director of Systems and Networks at Deimos.

For Envisat, whose operators had to monitor 20,000 readings continuously to operate and control the satellite, Deimos created a software system designed to cope with the vast complexity of planning the satellite's operations.

Since its creation in 2001, Deimos Space, now part of Elecnor Deimos, has been spinning off the space technologies and techniques acquired by its involvement in space projects. ESA's Technology Transfer Programme technology broker for Spain, Tecnalia, collaborates closely with Elecnor Deimos through ProEspacio, the Spanish Association for Space Technologies, to develop spin-off opportunities.