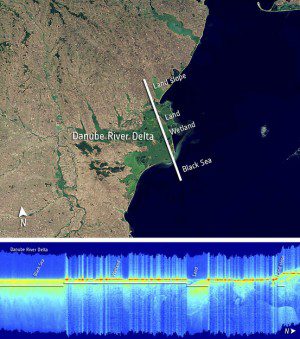 Altimeter readings from ESA’s CryoSat satellite are of unprecedented sharpness compared with previous altimeters. This image shows a range of radar reflection intensities over the Danube River delta in eastern Romania, including the Black Sea, wetlands and elevated land. Over the wetlands’ standing waters, points of bright radar reflections are pictured in red. Over sea or land they appear yellow.

The European Space Agency’s ice mission gives scientists a closer look at oceans, coastal areas and inland water bodies—and now, even land—reaching above and beyond its original objectives.

Launched in 2010, the polar-orbiting CryoSat was developed to measure changes in the thickness of polar sea ice, the elevation of the ice sheets that blanket Greenland and Antarctica, and mountain glaciers. The satellite’s radar altimeter not only detects tiny variations in the height of the ice, it also measures sea level and the sea ice’s height above water to derive sea-ice thickness with an unprecedented accuracy.

At a higher precision than previous altimeters, CryoSat’s measurements of sea level are improving the quality of model forecasts. Small, local phenomena in the ocean surface like eddies can be detected and analyzed. Taking CryoSat a step further, scientists now have discovered that the altimetry readings have the potential to map sea level closer to the coast as well as even greater capabilities to profile land surfaces and inland water targets such as small lakes, rivers and their intricate tributaries.

Radar altimeters have more difficulty doing this because, compared with open ocean measurements, the landscape surrounding inland water bodies is a lot more complex. Such areas hadn’t been previously monitored with satisfying accuracy by conventional altimeters because the sensor footprints—about 5 x 5 kilometers—were too large to detect subtle differences in the topography around small landforms. CryoSat, however, has a resolution along its ground track of about 300 meters.