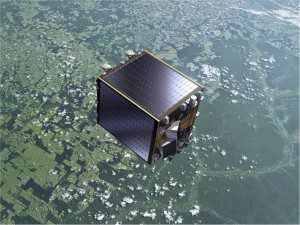 The V in Proba-V's name stands for Vegetation. Proba-V will fly a reduced-mass version of the Vegetation instrument currently on board the Spot satellites to provide a daily overview of global vegetation growth.

The European Space Agency's Proba-V miniature Earth observation satellite is at Europe's Spaceport in French Guiana, where it is being prepared for an April launch atop a Vega launcher.

Despite its small size, Proba-V is tasked with a full-scale mission: to map land cover and vegetation growth across the entire planet every two days. The satellite is flying a lighter but fully functional redesign of the Vegetation imaging instruments previously flown on France's full-sized Spot-4 and Spot-5 satellites, which have been observing Earth since 1998.

Proba-V is the latest addition to the Proba family of small, low-cost space missions, giving flight experience to promising European technologies. So along with hosting its main instrument, Proba-V also provides early test flights for a variety of advanced guest payloads. These include a receiver for global air traffic monitoring, novel space radiation detectors, experimental fiber optic connectors and a radio amplifier built from the promising new gallium nitride semiconductor.