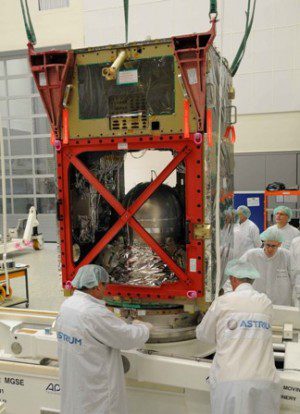 Sentinel-2 is the high-resolution optical component of ESA's GMES mission. Sentinel-2A, shown here, is the first of two Sentinel-2 satellites.

The European Space Agency (ESA) is maintaining its position that it will cancel the planned 2013 launching of a series of Earth observation satellites co-financed with the European Commission unless the commission commits to financing their operation beyond 2014, ESA Director-General Jean-Jacques Dordain said Jan. 9.

At a press conference atESAheadquarters and in a subsequent interview, Dordain said the agency has retained legal ownership of the Sentinel-1A, Sentinel-2A and Sentinel-3A satellites until they are in their operating orbits. As the sole owner, he said,ESAhas no need to seek European Commission approval to leave the spacecraft on the ground.

The Sentinel satellites are part of Europe's multibillion-dollar Global Monitoring for Environment and Security (GMES) program, on whichESAand the Brussels-based commission of the 27-nation European Union (EU) have together spent some 2.3 billion euros ($3 billion).

ESAwas charged with designing and launching the satellites, with the commission to take over the program, and finance its operations and future development. The commission has estimated that it will cost some 5.8 billion euros to maintain and operate GMES between 2014 and 2020.

That plan came unhinged in mid-2011 when the commission decided to remove GMES from the multiyear budget it is preparing for 2014 to 2020. In November, the commission proposed that the 27 EU nations agree among themselves to fund GMES, with contributions based on each nation's gross domestic product.

ESAand individual EU governments, as well as prospective GMES users, have been sharply critical of this scenario. They say that by making GMES an intergovernmental program requiring a fresh set of agreements among nations, the program's future has been cast into doubt.

ESA's 19 member governments and the European Council, representing the EU's 27 government members, reiterated these concerns in a Dec. 6 resolution.

GMES, the resolution says, is under the responsibility and management of the European Commission. The resolution also acknowledges that, unlike Europe's Galileo navigation satellite system, no one as yet has assumed formal ownership of GMES. Galileo is owned by the European Union.

The resolution came six weeks afterESA's ruling council wrote the European Commission sayingESAcould not finance GMES in the place of the commission.

The decision on the launch of the first GMES Sentinel satellites is in 2012, the letter, dated Oct. 27, says. In the absence at that time of EU commitments for the availability of operational funding beyond mid-2014 we will instructESAnot to launch the satellites.

Seeking to lower the temperature of the debate, Dordain on Jan. 9 said the council letter should not be seen as a threat to the commission, but rather as a responsible use of expensive satellite assets.

ESAhas already contracted with the Arianespace launch consortium for a Soyuz launch for the first Sentinel satellite in 2013 and has the necessary funds to commit to this launch and to the launch of the other two A models of the Sentinel spacecraft, also planned for 2013.

Given that the European Commission's preparations for its 2014 to 2020 budget are likely to stretch into 2013, the commission is unlikely to be able to commit to GMES financing in 2012. Dordain said that is OK.

ESA, he said, is not asking for a financial commitment in 2012, but for some kind of guarantee that there will be someone to finance operations.

Where would my credibility be if I launch them and then wash my hands of the program”without knowing who the satellites belong to or who will operate them”and consider that I've done my job? No, a satellite costs a certain sum of money so that it will be operated. Not to turn them on in orbit would be even more problematic than to leave them on the ground. That's our message.