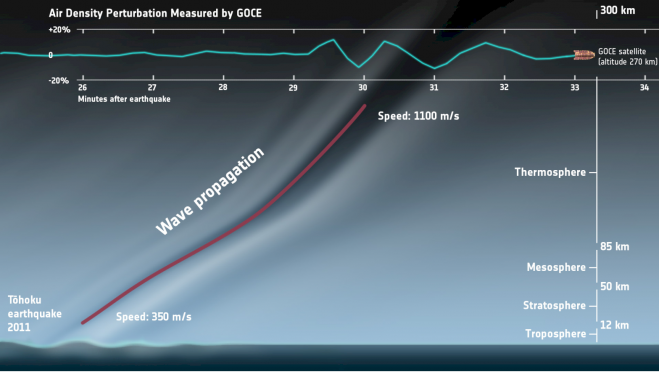 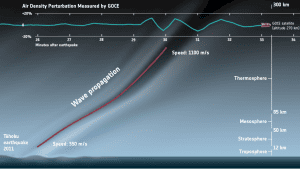 The European Space Agency’s GOCE satellite detected sound waves from the massive earthquake that hit Japan on March 11, 2011. At GOCE's orbital altitude, the concentration of air molecules is low, so weak sound waves coming up from the ground are strongly amplified. Variations in air density owing to the earthquake were measured by GOCE and combined with a numerical model to show the propagation of low frequency infrasound waves.

Earth observation satellites often map changes in Earth’s surface caused by earthquakes, but never before have sound waves from a quake been sensed directly from space—until now.

The size of these waves changes from centimeters at the surface to kilometers in the thin atmosphere at altitudes of 200–300 km. Only low-frequency sound—infrasound—reaches these heights, causing vertical movements that expand and contract the atmosphere by accelerating air particles.

The European Space Agency’s hyper-sensitive GOCE gravity satellite has added yet another first to its list of successes. Exploiting GOCE data to the maximum, scientists have been studying past measurements, discovering that GOCE detected sound waves from the massive earthquake that hit Japan on March 11, 2011.

When GOCE passed through these waves, its accelerometers sensed the vertical displacements of the surrounding atmosphere in a way similar to seismometers on the surface of Earth. Wave-like variations in air density were also observed.

“Seismologists are particularly excited by this discovery because they were virtually the only Earth scientists without a space-based instrument directly comparable to those deployed on the ground,” said Raphael Garcia from the Research Institute in Astrophysics and Planetology. “With this new tool they can start to look up into space to understand what is going on under their feet.”