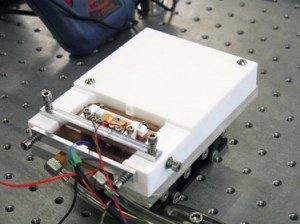 A team of U.K. scientists has adapted satellite imaging technology intended for Earth observation to create an instrument that can recognize explosives remotely.

The system uses an infrared laser to detect volatile compounds given off by explosives and other dangerous materials. Homemade chemical and explosive weapons pose a significant risk to people in many places around the world. Most improvised devices have some kind of volatile material associated with them. These are often remnants of the ingredients used to make the devices or chemicals that are produced as explosive materials decompose over time.

These compounds can be detected if a sensor is placed close enough to sample the surrounding air, but this is a risky business. Remote sensing is a safer option; however, it isn't perfect either.

Space-based remote sensing techniques rely on the fact that every species of molecule has a characteristic radiation absorption spectrum. By measuring this unique pattern of frequencies, the presence”and often the concentration”of a molecular species in a gas can be determined.

“Passive” remote sensors simply collect thermal radiation from the scene. However, these are far too insensitive to reveal trace gases at parts per million concentrations over the short absorption distances necessary for detecting explosives.

Light detection and ranging (LiDAR) technology, in contrast, is an “active” system that sends out a laser beam and interprets the backscatter. LiDAR offers a big jump in sensitivity, but each instrument works at only one wavelength. While this is fine for spotting specific gases, it isn't suitable for multigas detection and the comprehensive investigation of explosives of unknown composition.

This new explosives detector was created by Damien Weidmann and his team at Rutherford Appleton Laboratory (RAL). The researchers were originally designing a new passive satellite spectrometer when they realized it could be adapted for use in an active system for detecting trace gases on Earth. Dubbed the Active Coherent Laser Spectrometer (ACLaS), the system uses quantum cascade lasers that are integrated on tiny semiconductor chips and work at room temperature. Crucially, the laser frequency can be tuned and scanned. To tackle the problem of low sensitivity, the illuminating laser beam is in the mid-infrared, which is the atmosphere’s “transparency window” where water-vapor interference is minimal. A further benefit is that the light will not harm human eyes.