In total, 111 satellites were launched for EO, excluding meteorology, between 2001 and 2010 from 26 countries, including commercial missions, compared with 251 satellites from 43 countries anticipated between 2011 and 2020. The abundance of EO satellites will vastly increase the supply of data available to applications, services, and scientific research and development. The focus of the satellite missions is determined by the typology of system operator.

Despite the climate of global economic uncertainty, growth is observed at each stage of the EO value chain. Investment into the sector is set to remain high, with environmental monitoring, natural resources monitoring and defense at the top of government policy agendas. A growing number of commercial satellites are expected from new actors, as well as from existing companies replacing and expanding their respective fleets to meet the growing demand of high-resolution data for a range of applications, including defense, energy, location-based services, etc. Nevertheless, government customers remain critical.

Overall, investment into civil government EO reached $5.9 billion in 2010—an all-time high. Leading EO programs have a continued focus on environment and climate change; however, future budget pressure remains a concern. Meanwhile, in-development programs continue to expand their capabilities, and the sector remains the first application area for emerging programs.

Of the additional 17 countries expected to launch satellites during the next 10 years—Venezuela, Azerbaijan, Kazakhstan, etc.—analysts anticipate that in the majority of cases, this will be achieved through assistance from more experienced third parties, either through wider government bilateral agreements and/or with established satellite manufacturing companies. In both cases, technology transfer is key for countries looking to establish autonomous satellite capacity.

These emerging programs benefit from the development of generic satellite platforms and cameras, such as those supplied by Surrey Satellite Technology Ltd. (SSTL), which reduces cost barriers. Data collected from first-generation satellites from emerging programs are broadly similar: optical medium-resolution—approximately 30 meters—“Landsat-type” data. Although it’s thought that developing satellite capacity is more concerned with establishing a national space infrastructure, the data also can be used to serve local/regional needs for applications such as resource monitoring, land-cover mapping and cartography.

That said, second- and third-generation satellites from developing EO programs are becoming more capable with higher ground resolutions and accuracies. Moves to commercialize data from some of these initiatives to gain a return on the initial satellite investment will add further competition to the EO data market.

Sales of commercial data reached $1.3 billion in 2010 and continue to grow strongly. The U.S. government remains by far the largest consumer of commercial EO data, primarily for defense purposes through the National Geospatial-Intelligence Agency (NGA). Following consolidation in the U.S. industry, the industry has grown strongly—by a 23 percent compound annual growth rate during the last five years—largely in response to growing requirements for defense applications. Furthermore, the private sector is showing signs of increased development, particularly for location-based applications.

In total, 83 percent of all commercial data sales are from optical solutions. The remaining 17 percent come from synthetic aperture radar (SAR) data solutions. Somewhat unsurprisingly, sub-1-meter-resolution datasets represent the bulk of data sales, such as data provided by U.S.-based operators DigitalGlobe and GeoEye. Because the U.S. Department of Defense is the key customer for image intelligence applications, customers show a clear preference for high resolutions and higher accuracy data sources.

High-resolution datasets also have witnessed growing up-take, especially since the launch of the 2.5-meter-resolutionSPOT-5 satellite in 2002 and the growing supply of datasets in the 2.5-meter range during the last five years, such as SSTL’s Disaster Monitoring Constellation (DMC). The advantage of such datasets is increased swath (image width) for viewing, maximizing the overall area imaged and increasing overall revisit time. 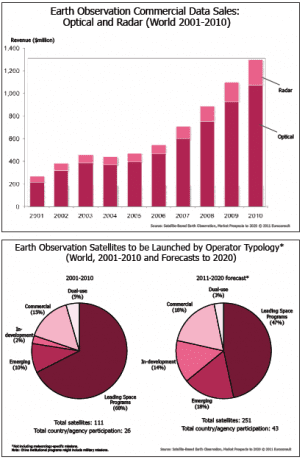 Competition for commercial data also will intensify from purely commercial actors and governments looking to tap into the commercial data market. The number of government and private satellites offering commercial data—based on anticipated life spans—is expected to increase to more than 55 from 2015 onward compared with 28 at the end of 2010.

To meet the growing demand for data, satellite operators and distributors are diversifying their distribution mechanisms to best serve customers’ needs. In addition, multiple markets remain underdeveloped for commercial data sales in terms of application areas and regions. Data are distributed to users through several distribution channels, depending on user requirements:

Being able to access potential new customers is key to generating revenue and capturing market share. Further diversification of distribution mechanisms is expected to continue, both in terms of geographical dispersion of global reseller agreements and new techniques for data and product delivery.