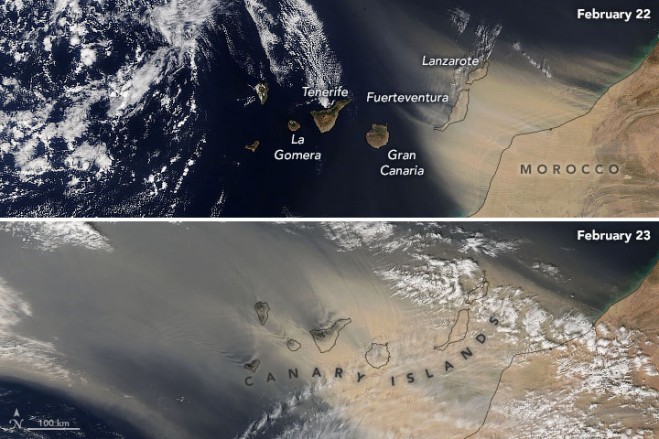 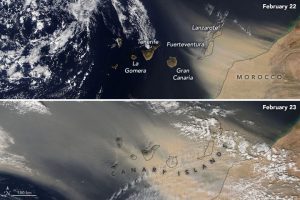 In late February 2020, strong Saharan winds picked up dust from Africa and carried it over the Canary Islands, severely reducing visibility and disrupting travel by land and air. Some public officials described it as the worst sandstorm in decades.

The Moderate Resolution Imaging Spectroradiometer (MODIS) on NASA’s Terra and Aqua satellites acquired these natural-color images of the storm on Feb. 22 and 23, 2020. Gran Canaria, Fuerteventura and Lanzarote appeared to be hardest hit by the storm, which started abruptly on February 22 and continued as rain clouds started to roll in on the 24th. (See this time-lapse animation.) Visibility was reduced to tens of meters in some places.

Such dust events, known to islanders as “La Calima,” typically last several days. They are provoked by hot, dry southeasterly or easterly winds blowing out from Morocco and Western Sahara, and they are sometimes associated with the Saharan air layer. Calima storms turn the skies orange or red over the island chain.