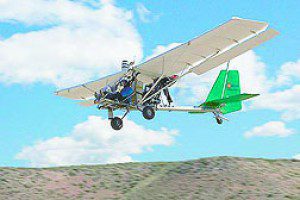 Unmanned aircraft could replace light planes like this one for rangeland monitoring missions.

In its early stages, the U.S. Agricultural Research Service (ARS) Very Large Scale Aerial (VLSA) imagery program has been helpful in finding changing conditions, such as increasing leafy spurge populations in some areas. ARS rangeland specialist Terry Booth has been instrumental in developing the unmanned aircraft program. He has found it to be a good way to sample vast areas of the western United States, especially when detecting invasive weeds like leafy spurge.

Booth is stationed at the ARS Rangeland Resources Research Unit in Cheyenne, Wyo., and received funding and technical assistance from the Department of Interior’s Bureau of Land Management (BLM).

“We recommend that it be used with ground-based methods for early detection of invasive species that might threaten native plant populations,” Booth said.

So far, he has done aerial surveys in Idaho, Colorado, Nevada, New Mexico, North Dakota, South Dakota, Oklahoma and Wyoming. Those surveys have looked at a variety of vegetation, including invasive species and native trees, grasslands and shrublands. Sites surveyed have ranged from gas pipeline rights-of-way to riverbanks, in addition to regular rangeland areas.

His research efforts are a part of a nationwide program where ARS scientists are using aerial photography to monitor a variety of lands with digital camera and sensors. These cameras and sensors are flown aboard a wide variety of aircraft”from regular small passenger planes to light sport airplanes to unmanned aerial vehicles (UAVs).

In the past, satellite imagery was used extensively for this purpose, but satellites can’t provide the resolution needed by BLM assessments of millions of acres of federally owned land. UAVs allow operators to survey line-of-sight areas repeatedly or immediately after a major rainstorm or forest fire. When photographs must be obtained in conditions that would put a pilot at risk, UAVs have the advantage over manned airplanes, and they can acquire imagery at very high resolution.

A group of ARS scientists and Andrea Laliberte, a New Mexico State University researcher, are studying the use of a UAV that cruises 700 feet above Earth, collecting digital photographs of rangeland areas that are so large they are difficult to cover in ground-based surveys. The aircraft weighs 20 pounds, has a 6-foot wingspan and is launched from a catapult.

The goal of using aerial imagery, according to Laliberte, is to measure rangeland vegetation cover as well as collect enough information about landscape patterns, so determinations can be made on which areas merit closer ground-level surveys.

Current federal safety requirements and associated costs limit the use of UAVs. Even with a Certificate of Authorization form from the Federal Aviation Administration, UAVs are not allowed to be flown out of sight of ground operators. But this and other restrictions may change in the future.

So if you are out checking the cattle herd someday on federal grazing land, don’t be surprised if you see a small aircraft making passes over the area. Ultimately, UAVs and other aircraft are tools for remote sensing, along with satellites, digital cameras, infrared cameras and infrared imaging sensors.

“You can use any one of these or any combination of these, depending on your needs, Booth said. The exciting part is that all of these technologies are advancing at a quick pace.