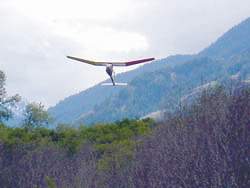 A Raven UAS can be controlled manually or programmed to fly preset routes based on Global Positioning System coordinates.

Researchers are using Raven unmanned aircraft systems (UASs) to monitor Washington’s $315 million Elwha River project in hopes they can be used throughout the United States.

The hands behind the UAS controls and the eyes watching the video streaming from cameras on the craft to a laptop computer will belong to researchers from the U.S. Geological Survey (USGS), the federal Bureau of Land Management and the National Park Service.

It’s the second series of flights over the Elwha for the Ravens. The first flights were in June, when the small aircraft glided almost silently about 500 feet above the river, just south of what was at one point Lake Aldwell.