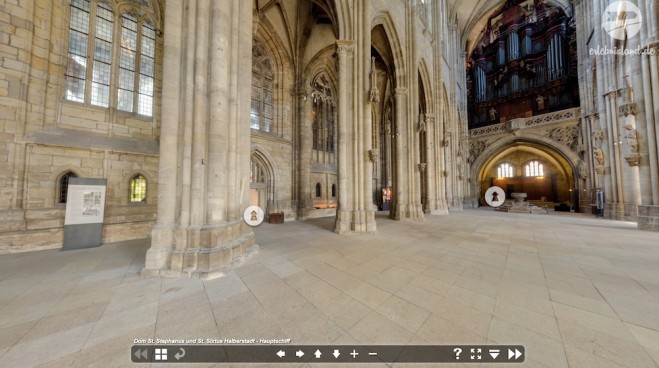 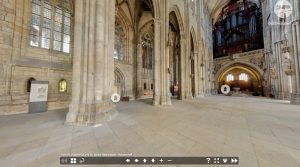 As part of the preservation process, drone data were used to create a 360-degree tour of Halberstadt Cathedral.

The 15th-century Halberstadt Cathedral in Saxony – Anhalt, Germany, is getting help from 21st-century technology: the Intel Falcon 8+ drone. In collaboration with experts from Bauhaus University Weimar and Kulturstiftung Sachsen – Anhalt, a foundation for the preservation of cultural monuments, Intel is powering inspections and damage assessment of the cathedral with advanced commercial drone technology.

Through a series of indoor and outdoor missions on automated and manual flight paths, the Intel Falcon 8+ drone helped capture data that will inform next steps for restoration planning, ensuring the cathedral and its artwork will flourish for centuries to come.

Historical structures can deteriorate through time due to changing environmental conditions. Standard stock condition surveys and structural health monitoring are evidence-based approaches that have historically been used to look at all parts of a building to assess its condition and state of repair. Although a critical process, these surveys are very costly and technically difficult to conduct.

The Intel Falcon 8+ drone is providing the conservation team with a new cost-effective way to carry out a visual inspection of fragile, hard-to-reach structures without disturbing their surroundings. This is especially important because of the delicate condition of this Gothic-style church and its artwork. Several damaged statues required a new approach for stock condition surveying to mitigate the potential risk of damage from traditional methods involving ladders or scaffolding. These stone statues, nearly 20 feet above the cathedral floor, are in precarious condition due to their fragile state and delicate color pigment, which is now a detached shell on the stone surface.

“Advanced technology, like the Intel Falcon 8+ drone, provides enormous potential for structural monitoring,” said Norman Hallermann, Bauhaus University Weimar. “While we are just in the beginning stages of this three-year project, the costs saved by carrying out these inspections via a drone are already being put towards further conservation efforts.”

The Intel Falcon 8+ drone captured nearly 1,000 detailed images (and additional footage) in less than an hour of total flight time. That data was post-processed to generate precise 3D structural models for the team to analyze. When preserving cultural monuments, accurate surveys and detailed inspections are needed before any restoration work can begin.