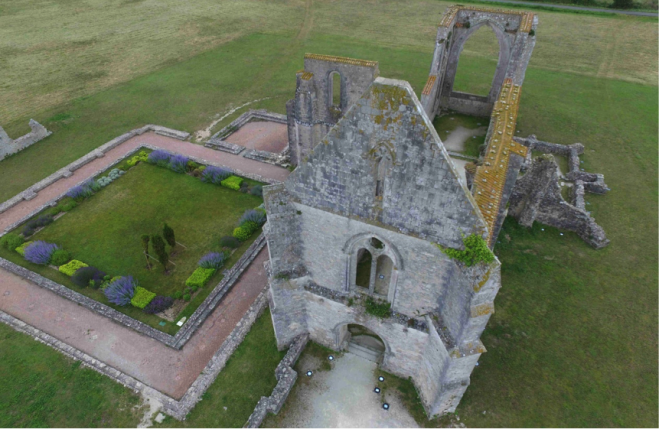 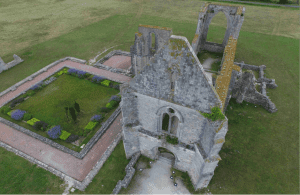 To explore how to better expand and improve their services, French photography and photogrammetry-based service provider Unautregard teamed with Planète Sports & Loisirs and 3D Arcwest to capture, 3D model and 3D print the ruins of the Abbey of Chateliers and the church of Ars-en-Ré: two cultural-heritage icons of the Île de Ré, in France.

“First we had to select iconic buildings on the island that were aesthetic enough to highlight their aerial capturing, and interesting enough in terms of volumes to be 3D printed,” said Guy Dentan of Unautregard.

The data-acquisition methods and equipment had to be adapted to two different environment conditions. The ruins of the Abbey of Chatelier, constructed in the 12th century, are located in the middle of fields in a rural environment, while the church of Ars-en-Ré, a building dating from the 15th century, stands with its emblematic black and white bell tower on a square in the center of the village, in a densely built area.

To capture the ruins of the main building and remains spread on surrounding fields, the equipment chosen was a DJI Phantom 3 Advanced drone and an iPad Mini to control the drone with Pix4Dcapture in “Free Flight Mission” mode. Two 20-minute flights were necessary to capture the 851 images used as input.

To reconstruct the church and its tall steeple with high precision, and to overcome the challenge posed by a densely built surrounding environment, the team chose a DJI Inspire 1 drone fitted with a Zenmuse X5 camera and an iPad Mini to control the drone flight and image capture with Pix4Dcapture in “Free Flight Mission” mode. Seven 20-minute drone flights were necessary to capture the 1,222 images used as input.

The processing Quality Report of this project outlined a GSD of 1.06 centimeters/0.42 inches. The mesh generated by Pix4D was optimal upon completion of calculation; it offered unparalleled realism and a very high level of detail. Shrubs around the ruins were cleared using Pix4D editing tools to make the model ready to print in 3D.

The processing Quality Report of this project outlined an impressively low GSD of 0.7 centimeters/0.27 inches, and, as in the case of the abbey, the mesh was edited to remove unwanted elements before 3D printing. All the cars parked around the building were suppressed with Pix4D software-editing tools.