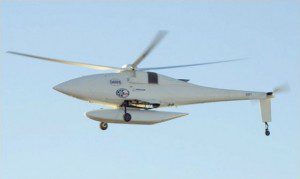 The U.S. Army says its A160 drone carries the largest video sensor ever used to conduct tactical missions.

The U.S. Army is getting ready to deploy a trio of prototype A160 Hummingbird drones as it evaluates the aircraft for a more full-fledged development program. One key characteristic that sets these unmanned air vehicles apart from others, such as the Predator, already more famously serving in the war zone is that the Hummingbirds are rotorcraft”that is, they fly like helicopters rather than planes.

The Hummingbirds will be equipped with DARPA's Argus-IS sensor system, which features a 1.8-gigapixel color camera”gear that the Army a year ago described as the largest video sensor ever used to conduct tactical missions. The Army said at the time that Argus can track people and vehicles from altitudes above 20,000 feet and, attached to an A160, should be able to scan almost 25 square miles. It will allow operators to scan a wide field of view and download images in real time.

Additionally, the cutting-edge technology allows ARGIS-IS operators on the ground to designate windows around up to 65 specific sites or targets they want to monitor. They can choose buildings, road intersections or other fixed locations the system will stare at, or people or vehicles to trail, even if they're moving in different directions”all automatically. The Boeing-built Hummingbirds, which can fly for 12 hours at a stretch, are now set to arrive in May or June of next year. Initial deployment had apparently been intended for the first half of 2012.

Argus-IS stands for Autonomous Real-time Ground Ubiquitous Surveillance-Imaging System. Those of you who recall your junior high school classics lessons will recall that, in Greek mythology, Argus was a watchman (or a monster) with 100 eyes. At the moment, Army developers and engineers are doing wiring work on the A160 and performing ground tests with ARGUS.

The ARGUS sensor suite has never been flown on this platform before, so we have to make sure the integration is complete, said Lt. Col. Matthew Munster, product manager for unmanned aerial system (UAS) modernization, in a statement last week. We are finishing that up now and adding some different types of antennas. We begin flight testing of the UAS at Yuma Proving Grounds, Ariz., early next year.

The Hummingbirds will be deployed for up to a year.