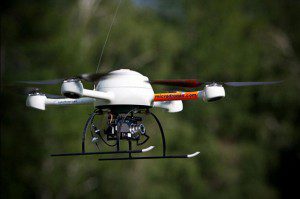 Archaeological sites are often in remote and rugged areas. As a result, it can be hard to reach and map them with the limited budgets archaeologists typically have. Scientists are now using drones to extend their view into these hard-to-reach spots.

“There are a lot possibilities with this method,” said researcher Marijn Hendrickx, a geographer at the University of Ghent in Belgium.

The machine tested in Tuekta, a remote area in Russia, was a four-propeller “quadrocopter”: the battery-powered Microdrone md4-200. It's small size made it easy to transport, and researchers said it was easy to fly, stabilizing itself constantly and keeping at a given height and position unless ordered to do otherwise. The engine also generated almost no vibrations, so photographs taken from the camera mounted under it were relatively sharp. Depending on wind, temperature and payload, the drone’s maximum flight time is approximately 20 minutes.

Tuekta is in the Altai Mountains where Russia, China, Kazakhstan and Mongolia come together. Researchers there have discovered burial mounds 2,300 to 2,800 years old and up to 250 feet (76 meters) wide.

These burial mounds, called “kurgans,” probably belonged to chiefs or princes among the Scythians, a nomadic people known for their horsemanship, who once had a rich, powerful empire. Excavations of some of these have revealed extraordinary treasures of gold and other artifacts preserved by permafrost.

Nearly 200 burial mounds were discovered in Tuekta, situated along the River Ursul. The site’s heart appears to once have been a row of five monumental Scythian burial mounds with diameters between 140 feet and 250 feet (42 meters and 76 meters). Regretfully, “in this study area, most of the burial mounds are destroyed,” Hendrickx said.

The test area the researchers chose measured approximately 1,000 feet by 330 feet (300 meters by 100 meters), including the five giant mounds and dozens of smaller structures. They flew the drone at a height of 130 feet (40 meters) to study one mound in greater detail.

The lightweight nature of the microdrone was a problem at times. “In the field we had to deal with rising wind,” Hendrickx recalled. “At some point we even lost the radio connection with the drone ” this led to a sprint between the kurgans.”

Nevertheless, the researchers gathered enough data with the drone to create a digital elevation map of the site and a 3-D model of the mound.

“The 3-D model we created gives us the possibility to calculate the volume of the kurgan,” Hendrickx told LiveScience. “With this volume and its precise dimensions, the original shape of the kurgan can be reconstructed.”

Archaeologists have begun to use airborne drones more often in the past decade or so, including in Peru, Austria, Spain, Turkey and Mongolia. The resulting maps can help archaeologists see the big picture of a site where up-to-date aerial or satellite images are hard to get, according to Hendrickx.

The researchers are now experimenting with a larger microdrone that can carry more weight.

The scientists detailed their findings in the November issue of the Journal of Archaeological Science.