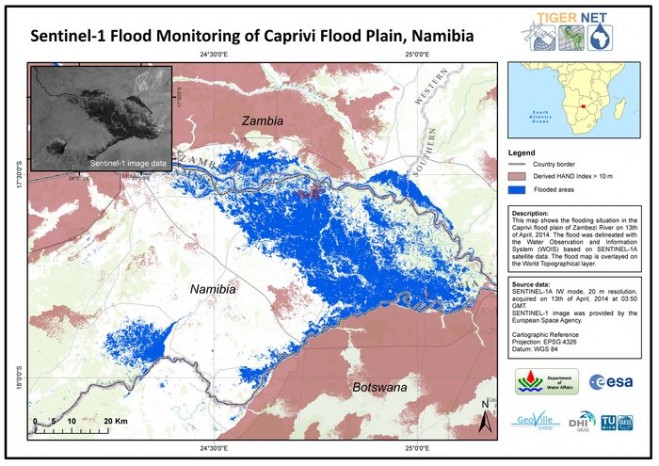 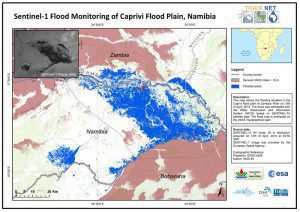 A Sentinel 1-A image shows the extent of flooding from the Zambezi River in northeast Namibia. The map was generated using one of the satellite’s first images in its main Interferometric Wide Swath mode with a swath width of 250 km on April 13, 2014.

The European Space Agency’s second Sentinel-1 satellite is set to join its identical twin in orbit in early 2016, optimizing the mission’s ability to manage the environment and improve everyday lives.

According to a contract, which was signed with Arianespace on July 17, 2014, Sentinel-1B will be launched on a Russian Soyuz rocket from Europe’s Spaceport near Kourou in French Guiana—as was Sentinel-1A. Launched in April this year, Sentinel-1A is the first satellite designed specifically for Europe’s Copernicus program, the largest environmental monitoring effort in the world. Although it is still being calibrated and not yet quite in its operational orbit, the radar satellite already has been used to help respond to several disastrous floods.

The mission was designed as a constellation of two satellites, launched separately. Orbiting Earth 180 degrees apart, the constellation optimizes data delivery and revisits everywhere on Earth every six days.