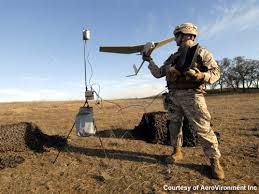 Drones purchased or funded by the Department of Justice since 2006 are described as “small UAS, which are UAS weighing up to 55 pounds,” such as this hand-launched AeroVironment Raven, weighing just 4.2 pounds with a 4.5-foot wingspan.

A September 2013 Department of Justice (DOJ) report reveals the agency has spent $3.7 million on small drones since 2006, including $3 million for the Federal Bureau of Investigation.

DOJ Inspector General (IG) Michael Horowitz also revealed the department has awarded $1.26 million to at least seven local police departments and nonprofit organization for drones and that the Bureau of Alcohol, Tobacco, Firearms and Explosives (ATF) plans to use drones to support future operations. To date, ATF has spent almost $600,000, according to the IG report.