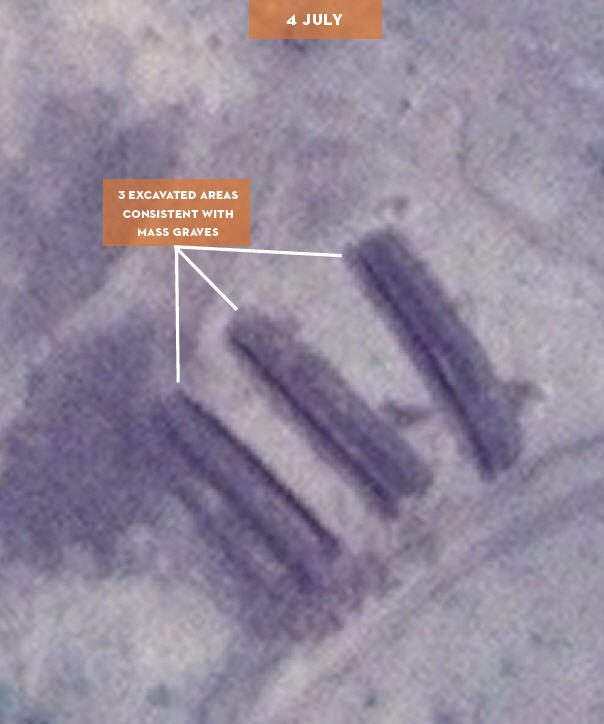 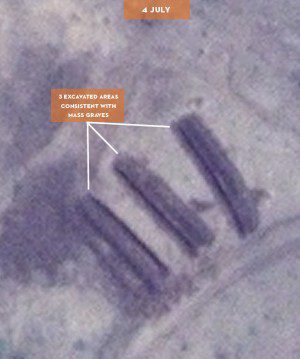 According to SSP, this DigitalGlobe satellite image acquired July 4 shows three excavated areas that are consistent with mass graves.

Evidence found by the Satellite Sentinel Project (SSP) is consistent with allegations that the Sudan Armed Forces (SAF) and northern militias have engaged in a campaign of killing civilians.

Based on Harvard Humanitarian Initiative’s analysis of DigitalGlobe satellite imagery and eyewitness reports, SSP has identified a site in Kadugli consistent with three mass graves. SSP’s new evidence corroborates four, independent eyewitness accounts that SAF, northern militias and other forces aligned with the Government of Sudan (GoS) are present in Kadugli and are alleged to be methodically searching houses for civilians. The four eyewitnesses claim that the SAF and GoS-aligned forces are systematically killing those suspected of supporting the Sudan People’s Liberation Movement (SPLM) and others.

“This evidence demonstrates the urgent need for a full-scale international investigation into the violence in South Kordofan, and underlines the imperative to protect civilian populations from their own government in Khartoum,” said Enough Project Co-founder John Prendergast, who co-founded SSP with George Clooney after they traveled together to South Sudan in October 2010. “With all the killing that has occurred in Darfur, Abyei and the Nuba Mountains, we surely can’t say we didn’t know this could happen. Diplomacy as usual backed by no tangible international pressures is a recipe for ongoing death and destruction. The time has arrived for the international community to create a heavy cost for the kinds of crimes depicted in this report, and root that cost within the framework of the international responsibility to protect doctrine.”

“Detailed situation reports from UN agencies and other aid providers are severely limited due to the lack of free and unfettered access to Kadugli town,” said Harvard Carr Center Executive Director Charlie Clements, MD. “In the absence of on-the-ground reports from humanitarian actors and journalists, eyewitness reports from those who were in Kadugli town within the past month, combined with satellite imagery analysis, offer the only available means at present of assessing threats to civilians there.”

SSP’s report stated, “Under the Rome Statute and other international humanitarian law, the systematic killing of civilians in peace or war by their own government can constitute crimes against humanity.”

“It is incumbent upon the UN Security Council to preserve and probe any evidence of mass graves and mass killings of civilians in Kadugli and the vicinity,” said Enough Project Executive Director John C. Bradshaw. “Witnesses, whose lives appear to be in great danger, must be protected immediately. That is why we are communicating our Satellite Sentinel Project findings to the Administration and requesting that the U.S. government use all available pressure and assets to investigate evidence of mass graves and the alleged slaughter of civilians in the Nuba Mountains.”