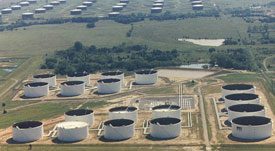 Cushing is the physical delivery point for New York Mercantile Exchange oil futures contracts and the largest crude- trading and storage hub in the United States. According to the department on May 31, the hub has working storage capacity of 48 million barrels.

The DigitalGlobe estimate is based on images of operational floating-top tanks at Cushing, which increased by 2 to a total of 225 since the previous collection, according to the satellite company. The number of fixed tanks at the hub declined to 109.

Oil storage capacity at Cushing may rise 21 percent to 75 million barrels of storage capacity in the next six months, according to Joseph Gorder, an executive vice president at Valero Energy Corp.

Blueknight Energy Partners LP and TransMontaigne Partners LP reported on July 19 they will construct 1 million barrels of crude storage in Cushing. The site will allow for the delivery of oil by truck and pipeline and blending operations.

Cushing's floating-roof tanks are used mostly to store crude oil, according to Andy Lipow, president of Lipow Oil Associates in Houston, who estimates that 90 percent of the storage volume in the hub is floating tanks. Fixed-roof tanks are for storing petroleum products with lower vapor pressures, such as jet fuel and distillate.

Some fixed-roof tanks in Cushing may have been retrofitted with internal floating roofs and may be used to store crude oil, according to Lipow. Heavier crudes can also be kept in fixed- roof tanks.

When clouds obscure the satellite view, data are used from the last day in which there was a full collection. The highest percent of collection data will be used when cloud cover obscures images during a collection period.

Inventories were not fully visible during the previous satellite survey on July 21 and 22. Stockpile totals in floating-roof tanks at the hub were ascertained for only 170 of 223 tanks on July 21. The last full data collection occurred on July 16.