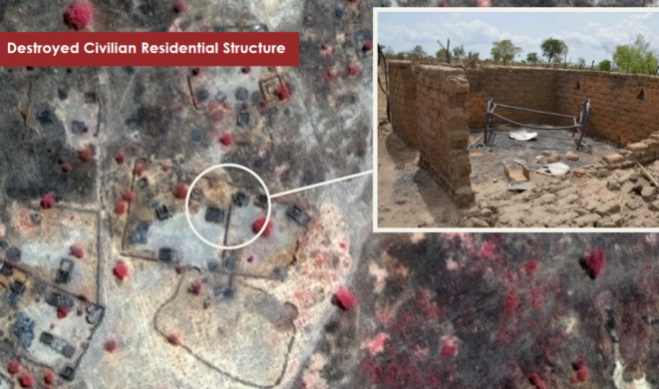 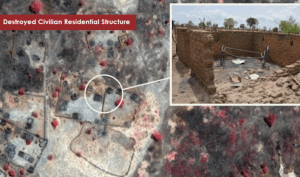 At least 80 buildings in the village of Um Bartumbu, South Kordofan, Sudan, were burned sometime between Nov. 12-Nov. 28, 2011, according to Satellite Sentinel Project analysis of Landsat and DigitalGlobe satellite imagery.

DigitalGlobe will continue providing the Enough Project with imagery and analysis services to monitor evidence of bombings, razed villages and possible threats to civilians in Sudan.

The monitoring effort is called the Satellite Sentinel Project (SSP). In addition to the imagery and analysis provided under the terms of the new agreement, DigitalGlobe will also contribute additional in-kind services.

“This partnership between DigitalGlobe and the Enough Project represents a game-changing leap forward in how to document evidence of crimes against humanity,” said George Clooney, who founded theSSPwith Enough Project co-founder, John Prendergast.

DigitalGlobe’s expert analysts will continue to analyze imagery and information from sources on the ground and produce situational awareness reports of the possibility of mass violence in Sudan and South Sudan. The Satellite Sentinel Project then releases the reports to news organizations and policymakers and quickly notifies a mobile network of activists through social media.

“We are honored to partner with the Enough Project to help save the lives of innocent civilians in Sudan and South Sudan,” said Jeffrey R. Tarr, president andCEOof DigitalGlobe. “We are especially appreciative of the generosity of George Clooney in making this important initiative a reality. Our satellite constellation and imagery analysts will enable us to detect threats to civilians and document crimes against humanity, and together with the Enough Project team make a meaningful difference for the people of Sudan.”