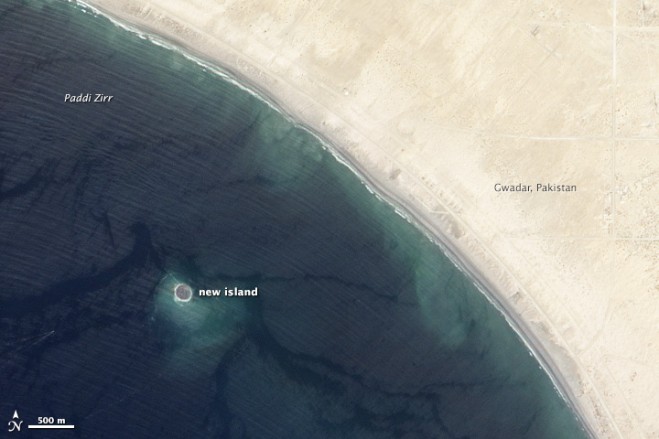 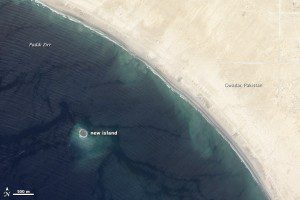 On Sept. 26, 2013, the Advanced Land Imager on NASA’s Earth Observing-1 satellite captured an image of Pakistan’s new island, which sits roughly one kilometer (0.6 miles) offshore. Likely a “mud volcano,” the island rose from the seafloor near Gwadar on Sept. 24, shortly after an earthquake struck about 380 kilometers (230 miles) inland.

On Sept. 24, 2013, a 7.7-magnitude earthquake rattled western Pakistan, leaving at least 350 people dead and than 100,000 homeless. The quake also created a new island near Gwadar, Pakistan. 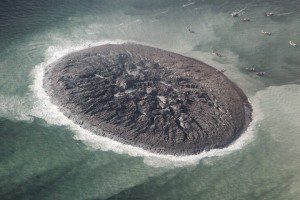 This aerial photograph from the National Institute of Oceanography provides a close-up of the landform, estimated to stretch 75 to 90 meters (250 to 300 feet) across and standing 15 to 20 meters (60 to 70 feet) above the water line. The surface is a mixture of mud, fine sand and solid rock.

“The island is really just a big pile of mud from the seafloor that got pushed up,” says Bill Barnhart, a geologist at the U.S. Geological Survey who studies earthquakes in Pakistan and Iran. “This area of the world seems to see so many of these features because the geology is correct for their formation.

“You need a shallow, buried layer of pressurized gas—methane, carbon dioxide, or something else—and fluids. When that layer becomes disturbed by seismic waves (like an earthquake), the gases and fluids become buoyant and rush to the surface, bringing the rock and mud with them.”

According to marine geologist Asif Inam of Pakistan’s National Institute of Oceanography, the underground pressure in this case came from expanding natural gas. “The main driving force for the emergence of islands in this part of the world is highly pressurized methane gas, or gas hydrate,” he says. “On the new island, there is a continuous escape of the highly flammable methane gas through a number of vents.”