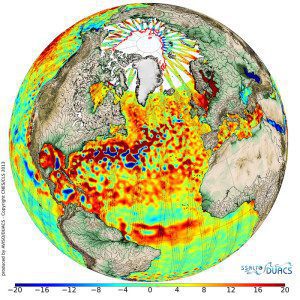 Average sea-surface topography for 2013, as mapped by CryoSat, was combined with data from the ERS-2, Envisat, GFO, Topex/Poseidon and Jason missions. Red represents higher sea levels (up to 20 mm) while blue represents lower areas (down to “20 mm). CryoSat's ground-tracks are seen as long strips.

Going above and beyond its objective to measure changes in the thickness of polar sea ice, the European Space Agency's CryoSat satellite is a valuable data source for the oceanographic community.

The satellite's radar altimeter can measure sea-level height and waves as well as detect small, local phenomena in the ocean surface like eddies. ESA has extended the CryoSat portfolio to include additional ocean products, and the datasets are now available to users for scientific and operational applications.

The new data help to bridge the gap between previous ocean-oriented radar altimetry missions”Jason-1/2 and Envisat”and the future Sentinel-3 mission being developed for Europe's Copernicus program.

In addition, CryoSat improves the dataset from the existing satellite missions by reaching closer to the north and south poles thanks to its unusually high-inclination orbit. Measurements from these previously inaccessible latitudes contribute to our knowledge on ocean“cryosphere interactions.