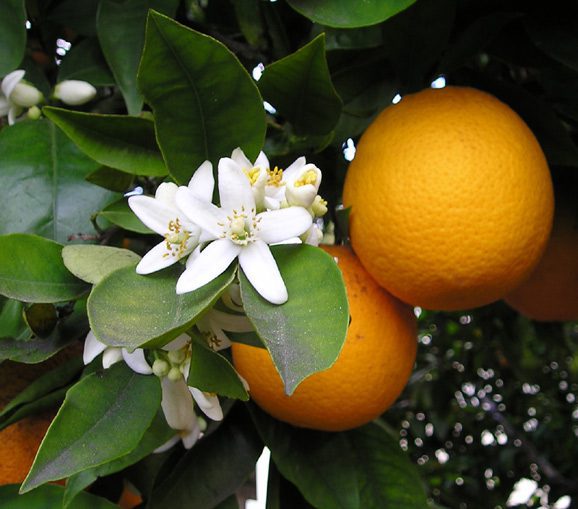 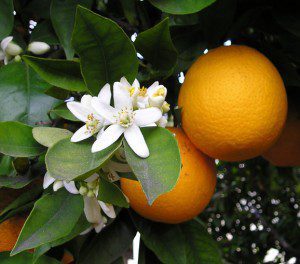 Florida’s annual citrus industry is valued at around $9 billion.

The small black-and-white device with rotating blades at the end of six arms looks like an alien spaceship from a science-fiction movie.

But this contraption is no fantasy for citrus growers. It quietly shoots straight up into the air, zips toward an orange grove and then hovers hundreds of feet above the trees, sounding much like a distant swarm of bees.

On the ground is Reza Ehsani, an associate professor of agricultural and biological engineering at the University of Florida (UF), holding a small electronic box that looks like a mini iPad he uses to control the “crop copter.” Ehsani and his team of researchers from UF’s Citrus Research and Education Center built the flying machine, about 2 feet wide and weighing 3 pounds. On board is a camera that can capture a variety of images of a citrus field from as high as 1,000 yards.

Ehsani and citrus experts say their crop copter is the latest in cutting-edge technology that citrus farmers could one day use to gather data on their crops in a cheap and quick way, including checking to see if plants are affected by pests and diseases, taking inventory and monitoring irrigation systems. In Central Florida, the copter could be a boon for citrus growers trying to spot citrus greening, a disease that attacks and kills trees and is currently wreaking havoc on Florida’s $9 billion-a-year citrus industry, according to Ehsani.

“I absolutely think this is the way of the future” in agriculture, Ehsani said. “This is a valuable tool to collect data cheaply.”

Typically, large growers pay “scouts” to drive up and down rows of citrus trees to take inventory and check on the health of each tree by looking at it from top to bottom. That can be time consuming and cost up to $100 per acre in some cases.

“You could spend three-fourths of a day doing that,” said Nick Faryna of Faryna Grove Care & Harvesting, which manages about 1,800 acres of citrus in north Lake County. “And you could spend several days if you’re looking for greening. … It’s expensive when you start paying people to ride every row. You’re using a lot of resources and time.”

Large growers also hire private pilots to fly above their groves to photograph and collect data. That can cost several thousand dollars a pop.

Looking for ways to cut costs

There are already a variety of other small remote-controlled flying machines—or unmanned aerial vehicles—used to capture images and data, including for urban planning, real estate and infrastructure surveying. Even the U.S. military uses drones piloted remotely for reconnaissance and attack missions.

But Ehsani’s device, along with the software his team is developing, is designed strictly for agricultural applications. And the team has already received calls from growers and companies from around the country showing an interest in his crop copter. The university’s center would then sell the research to a private company or investor.

“Our goal is to develop applications for growers and agriculture,” Ehsani said.

Though the copter is still in its early stages, it could one day become a godsend for growers and farmers, according to Faryna. “It quite possibly could develop into an important scouting tool,” he said.

The crop copter shows how the agricultural industry is always looking into the latest in high-tech gadgets to improve production.

“Growers are more and more looking for ways to cut costs, be more efficient and get higher yields, especially in today’s economy,” said Lisa Lochridge of the Maitland-based Florida Fruit & Vegetable Association.

Ehsani recently tested his copter at an oil-palm plantation in Malaysia, where trees can grow higher than 20 feet. That makes it difficult for scouts on the ground to gather data, especially in the warm and humid climate.

“If you’re trying to monitor your trees for a disease on a fixed timetable, then it becomes very expensive,” Ehsani said.

On the market, Ehsani said his mini-helicopter would cost about $10,000 but could run as high as $20,000 for “all the bells and whistles,” including one able to carry several cameras and longer-lasting batteries.

In the air it snaps pictures of a grove’s zones using a high-resolution camera and imaging sensors. When the crop copter returns, Ehsani and his team use the images to look at tree canopies, identify irrigation and drainage problems and check soil conditions. The device also can be used to estimate harvesting yields.

Ehsani keeps it at an altitude of about 400 feet because of Federal Aviation Administration regulations. Unlike remote-controlled airplanes or balloons tethered to a line, which growers have experimented with in the past, the copter can hover in place at a defined altitude.

“We wanted something that could go to a specific height location and stay there,” Ehsani said.

A grower or farmer can learn how to use the copter within a day, according to Ehsani. He and his team are now looking into a model that can be recharged in the air through a laser-beam shot from the ground.

It’s still too early to tell, but the mini-helicopter by Ehsani’s team could be the latest in modern gadgets and software that are changing the face of farming, according to Chris Oswalt, commercial citrus extension agent for UF’s cooperative extension service in Polk and Hillsborough counties.

“We’re not farming like we did 10 years or even five years ago,” Oswalt said.

Story by Martin E. Comas, courtesy of the Orlando Sentinel.