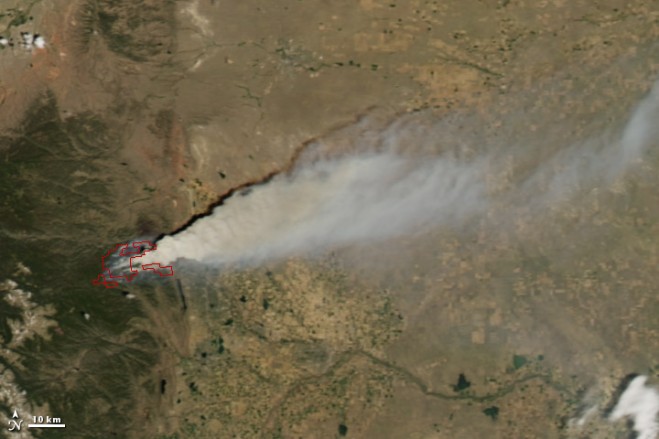 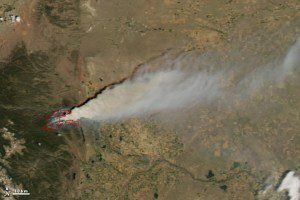 Soon after starting, the High Park fire spread in all directions—much of the fire’s fuel came from stands of beetle-killed trees. By the time the blaze started, mountain pine beetle outbreaks had killed vast tracts of trees in western North America.

The death was confirmed by Poudre Fire Authority Chief Tom DeMint, according to Denver’s 9News on June 11. Earlier in the day, Larimer County Sheriff Justin Smith expressed worry that one person missing in the fire may have perished. Against that sobering news, firefighters were heartened when late in the day sections of the blaze northwest of Horsetooth Reservoir had turned back on itself.

The High Park Fire, burning about 15 miles (24 kilometers) west of Fort Collins, was discovered just before 6 a.m. onJune 9, 2012, according to news reports. Perhaps started by a lightning strike, the fire quickly grew, fed by tinderbox fuels and high winds. By the morning ofJune 11, 2012, the blaze had burned nearly 37,000 acres (15,000 hectares) and was continuing to grow. There was no containment.

The Moderate Resolution Spectroradiometer sensor on NASA’s Aqua satellite captured these images of the fire onJune 10, 2012. Red outlines approximate the boundaries of the actively burning fire. Thick smoke from the fire blows eastward.