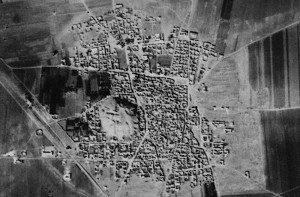 This 1961 spy satellite photo shows Tell Rifaat in northwest Syria. Now the area is surrounded by a modern town.

A study of declassified Cold War spy satellite photos has tripled the number of known archaeological sites across the Middle East, revealing thousands of ancient cities, roads, canals and other ruins.

“Some of these sites are gigantic, and they were completely unknown,” says atlas-team archaeologist Jesse Casana of the University of Arkansas, who presented the results at the Society for American Archaeology’s annual meeting in late April. “We can see all kinds of things”ancient roads and canals. The images provide a very comprehensive picture.”

The team had started with a list of roughly 4,500 known archaeological sites across the Middle East. The spy satellite images revealed another 10,000 that previously had been unknown.