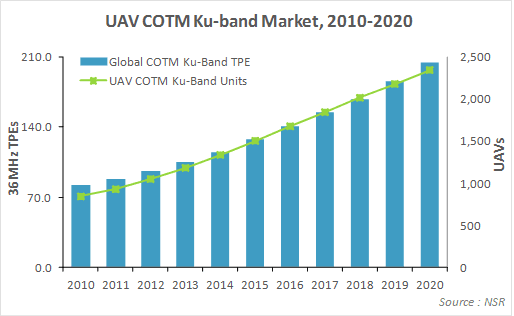 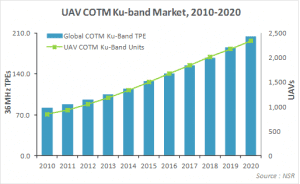 As a key weapon in the U.S. counter-terrorism strategy, the U.S. military plans to deploy air, surface and undersea robotic vehicles, which will be an integral component of future capacity demand. However, civil agencies are increasing unmanned aerial vehicle (UAV) requirements as well, a trend that should add significantly to commercial satellite bandwidth requirements over the long term, with UAVs dominating the comms-on-the-move (COTM) segment until 2020.

For instance, the U.S. State Department has taken to operating a small fleet of unarmed surveillance drones in Iraq to protect American personnel and has indicated that it may expand its drone program to other high-risk countries in the coming years.

The recent Northern Sky Research (NSR) report Government & Military Satellite Communications, 8th Edition, bandwidth requirements by UAVs are expected to be the highest of all the COTM platforms, despite a relatively low share of in-service units. With UAV missions on the rise and ISR instruments becoming more bandwidth intensive as well as the number of hours increasing per mission, UAV bandwidth demand can easily reach—if not breach—the 200 TPEs requirement for Ku-band forecasted by NSR by 2020.

Moreover, market offerings that are spun out of the Department of Defense and spill over to civil agency use could potentially be offered to the commercial market as well.  The Federal Aviation Administration is already in the process of laying the groundwork for such use, which could include utility companies for monitoring oil, gas and water pipelines as well as farmers spraying crops, among other applications.

For the moment, however, UAVs are not without controversy as missions have led to civilian casualties, are seen to be in violation of another nation’s sovereignty with the use of airspace and pose legitimate risk to commercial traffic through the danger of collisions with commercial aircraft. These factors could certainly curtail use and thus restrain satellite capacity demand for UAVs.

UAVs have been and will likely remain controversial, particularly as usage becomes more prevalent in military, civil government and over time, enterprise markets.  However, UAVs are here to stay, and their growing presence should lead to more benefits when weighed with the risks. The key lies in:

In NSR’s view, UAV demand is still in the early stages of the market cycle. Not if but when safety features and key concerns have to be addressed, UAV market development should reach the next stage of market evolution, where the commercial satellite industry will stand to reap enormous benefits via higher levels of capacity demand.