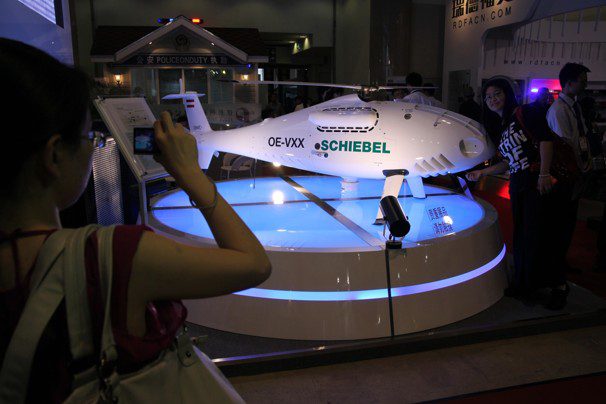 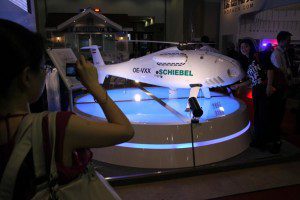 Chinese tourists pose in front of a helicopter UAV acquired from an Austrian company.

At the most recent Zhuhai air show, the premier event for China’s aviation industry, crowds swarmed around a model of an armed, jet-propelled drone and marveled at the accompanying display of its purported martial prowess.

In a video and a map the thin, sleek drone locates what appears to be a U.S. aircraft carrier group near an island with a striking resemblance to Taiwan and sends targeting information back to shore, triggering a devastating barrage of cruise missiles toward the formation of ships.

Little is known about the actual abilities of the WJ-600 drone or the more than two dozen other Chinese models that were on display at Zhuhai in November 2010. But the speed at which they have been developed highlights how U.S. military successes with drones have changed strategic thinking worldwide and spurred a global rush for unmanned aircraft.

More than 50 countries have purchased surveillance drones, and many have started in-country development programs for armed versions because no nation is exporting weaponized drones beyond a handful of sales between the United States and its closest allies.

“This is the direction all aviation is going,” says Kenneth Anderson, a professor of law at American University who studies the legal questions surrounding the use of drones in warfare. “Everybody will wind up using this technology because it’s going to become the standard for many, many applications of what are now manned aircraft.”

Military planners worldwide see drones as relatively cheap weapons and highly effective reconnaissance tools. Hand-launched ones used by ground troops can cost in the tens of thousands of dollars. Near the top of the line, the Predator B, or MQ9-Reaper, manufactured by General Atomics Aeronautical Systems, costs about $10.5 million. By comparison, a single F-22 fighter jet costs about $150 million.

Defense spending on drones has become the most dynamic sector of the world’s aerospace industry, according to a report by the Teal Group in Fairfax, Va. The group’s 2011 market study estimated that in the coming decade global spending on drones will double, reaching $94 billion.

But the world’s expanding drone fleets—and the push to weaponize them—have alarmed some academics and peace activists, who argue that robotic warfare raises profound questions about the rules of engagement and the protection of civilians, and could encourage conflicts

“They could reduce the threshold for going to war,” said Noel Sharkey, a professor of artificial intelligence and robotics at the University of Sheffield in England. “One of the great inhibitors of war is the body bag count, but that is undermined by the idea of riskless war.”

China on Fast Track
No country has ramped up its research in recent years faster than China. It displayed a drone model for the first time at the Zhuhai air show five years ago, but now every major manufacturer for the Chinese military has a research center devoted to drones, according to Chinese analysts.

Much of this work remains secret, but the large number of drones at recent exhibitions underlines not only China’s determination to catch up in that sector—by building equivalents to the leading U.S. combat and surveillance models, the Predator and the Global Hawk—but also its desire to sell this technology abroad.