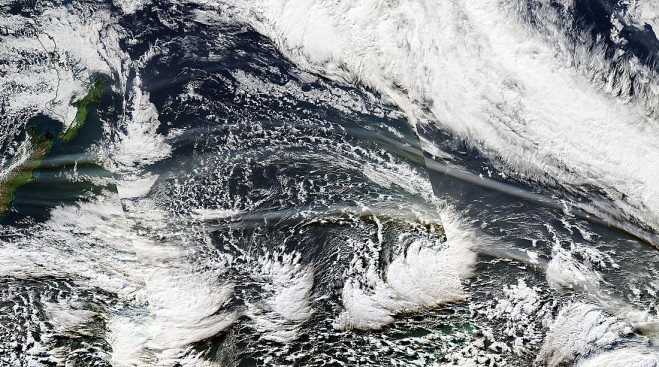 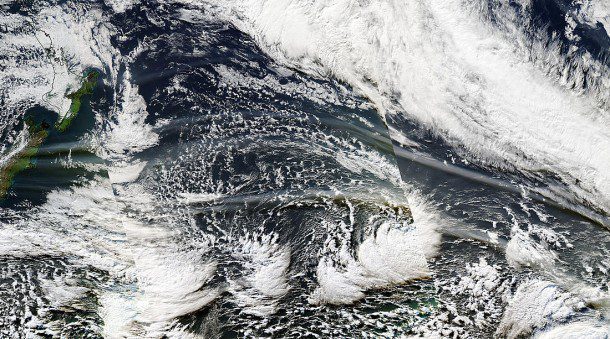 Three different satellite image flyovers were combined from NASA's Aqua satellite to show the journey of the volcanic ash from Puyehue-Cordón Caulle volcano as it traveled across the southern Pacific Ocean, past New Zealand (at left), on June 14, 2011.

The Puyehue-Cordón Caulle Volcanic Complex includes the Puyehue volcano, the Cordón Caulle rift zone and the Cordillera Nevada caldera. On June 4, 2011, a fissure opened in the volcanic chain, sending ash 45,000 feet (14,000 meters) into the air. The Moderate Resolution Imaging Spectroradiometer (MODIS) sensor, which flies on NASA’s Aqua and Terra satellites, provides daily imagery of the ash plume. Other satellites also have provided images and animations of the plume. For example, the GOES-11 satellite, which is operated by the U.S. National Oceanic and Atmospheric Administration, delivers imagery for plume animations created by the NASA GOES Project at NASA’s Goddard Space Flight Center in Greenbelt, Md.

The new NASA Goddard FLICKR image gallery contains a series of MODIS images from the day the Puyehue volcano erupted on June 4 to June 14.The images are shown in date order in the gallery and show the ash plume circling the southern hemisphere.

The image gallery focuses on the data from the MODIS instrument on Aqua and Terra to provide continuity and ease of identification of the ash plume. The plume can appear differently to other NASA satellites that look at the atmosphere using other parts of the spectrum other than visible and infrared light.

The gallery begins on June 4. As the plume shot up and blew southeast toward Argentina, heavier particles fell to the ground. According to the Buenos Aires Herald, the border town of Bariloc, Argentina, reported as much as a foot (30 centimeters) of ash on the ground.

In addition to large amounts of ash on the ground in Chile and Argentina, rainfall poses another problem. Chile’s National Geology and Mining Service noted that rainfall on loose ash could trigger landslides and lahars, especially in the Andes Mountains where river valleys are clogged with ash.

According to Agence France-Presse, air travel from South America to Australia has been adversely affected. NASA confirmed the ash locations in satellite imagery over New Zealand, South Africa and Tasmania this week.

On June 10, Aqua’s MODIS sensor showed winds pushed the plume east and northeast over Argentina. The next day, winds twisted the ash plume like a pretzel over Argentina. By June 12, Terra’s MODIS instrument saw the volcano’s ash plume blowing over the southwestern tip of South Africa on its way around the world, while Aqua’s MODIS sensor captured an image of the volcano that showed its plume being drawn into a low pressure system in the Atlantic Ocean.

The next day, June 13, NASA’s Aqua satellite provided an image of the light brown ash plume crossing over New Zealand and Tasmania. Tasmania is an Australian island and state located 150 miles south of Australia. Later in the day Aqua’s MODIS instrument showed the ash plume pouring out of the Puyehue-Cordón Caulle volcano and traveling east and northeast. The height of the plume varied during the day with the intensity of the eruption. Plumes were measured between 2.5 and 5 miles (4 and 8 kilometers) high at different times of the day.

On June 14, NASA satellite imagery from three different overpasses was pieced together by Jeff Schmaltz of the MODIS Rapid Response Team at NASA Goddard. NASA’s Aqua satellite overpasses created a mosaic of the volcanic ash plume traversing the South Pacific Ocean. Meanwhile, MODIS on the Terra satellite captured another look at what was happening at the volcano. At 15:15 UTC (11:15 a.m. EDT), winds continued pushing the plume east and southeast into the Southern Atlantic Ocean. The ash plume was reaching as high as five miles (8 kilometers) into the atmosphere.

As air traffic continues to be affected in Chile, Argentina, southern Brazil, Paraguay, Uruguay and even Australia, the news from Chile’s National Geology and Mining Service was that a possible return to increased eruption activity is likely. NASA continues to generate daily images of the Puyehue-Cordón Caulle’s plume over Chile and the rest of the southern hemisphere. For NASA Goddard FLICKR Gallery of images of Puyehue-Cordón Caulle volcano eruption from June 4 to June 14, 2011, visit www.flickr.com/photos/gsfc/sets/72157626837498837.