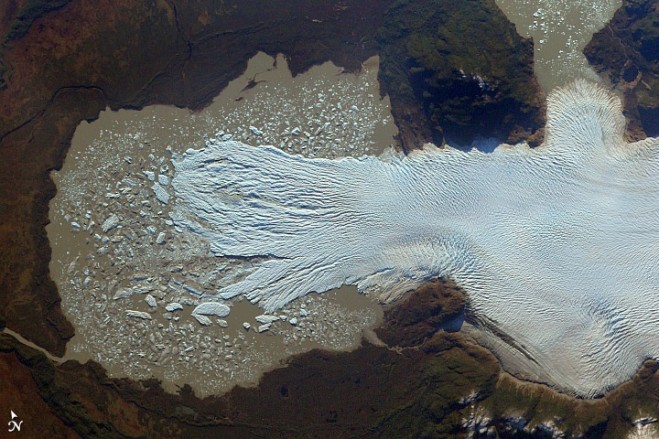 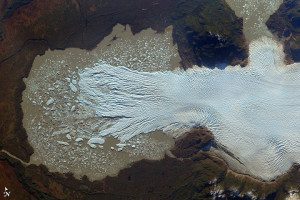 This image of the San Quintín Glacier was captured by the ISERV Pathfinder instrument, an experimental camera system in the Destiny module on the International Space Station. The instrument captures photographs of natural hazards, environmentally threatened regions and areas of historical or cultural importance. On June 2, 2014, ISERV snapped eight images of San Quintín that were made into a mosaic; the image above was cropped from that scene.

Chile’s Northern Patagonian ice field is one of the world’s largest temperate ice fields, but photos from space show its glaciers appear to be losing a significant amount of mass.

Twenty-eight exit glaciers flow out of the ice field, and San Quintín is the largest. San Quintín Glacier is situated within Laguna San Rafael National Park and drains west toward the Pacific Ocean. The terminal end of the glacier (left in this image) meets a lake that gets its beige color from glacial flour—the pulverized rock that is ground up by the moving ice. In the photo, hundreds of icebergs surround the glacier’s end, while a stream flows west toward the Golfo de Peñas on the Pacific Ocean.